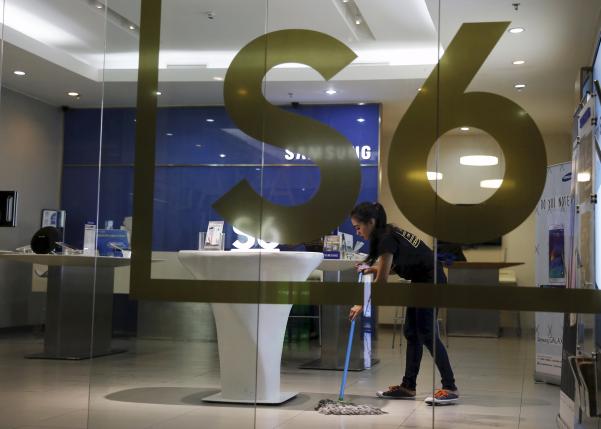 SEOUL - For four years Samsung Electronics Co Ltd (005930.KS) has basked in the success of its Galaxy smartphones, making billions of dollars competing with Apple Inc (AAPL.O) in the premium mobile market. The coming years are set to be more sombre for the South Korean tech giant, as it is forced to slash prices and accept lower margins at its mobile division in order to see off competition from rivals including China's Huawei Technologies Co Ltd [HWT.UL] and Xiaomi Inc [XTC.UL] in the mid-to-low end of the market. Behind Samsung's reality-check is the fact it is stuck with the same Android operating system used by its low-cost competitors, who are producing increasingly-capable phones of their own. "The writing has long been on the wall for any premium Android maker: as soon as low end hardware became 'good enough,' there would be no reason to buy a premium brand," said Ben Thompson, an analyst at Stratechery.com in Taipei. Margins at Samsung's mobile division fell to 10.6 percent from 15.5 percent a year earlier during the second quarter of 2015, despite the April launch of its critically acclaimed Galaxy S6 range. It remains the world's biggest smartphone maker but it is Apple that is reaping most of the rewards. While the US giant's smartphone sales in its last financial quarter fell short of market expectations, it is still estimated by some analysts to earn 90 percent or more of the industry's profits. Samsung said last week that it will continue trying to maximise profitability and market share, disclosing plans to launch new larger-screen premium phones as well as more bargain-priced handsets. Investors and analysts say the group is right to dig its heels in for a business that continues to generate piles of cash and drives sales for its components divisions. But they say Samsung will not be able to compete with Apple in the premium market based on hardware and will continue to trail the US firm in the absence of a major technological breakthrough. "Some still seem to think that a well-made product will sell well, but the Galaxy S6 showed that assumption is wrong," said IBK Securities analyst Lee Seung-woo, who predicts Samsung's mobile division margins will fall to 9.3 percent this year - the lowest since before the first Galaxy S phone launched in 2010. PRICE CUTS Acknowledging the headwinds, the South Korean firm said last week it will "flexibly adjust" prices of its flagship Galaxy S6 and S6 edge models to boost third quarter sales. Samsung cut the retail price of S6 edge smartphones in South Korea by around 100,000 won (55.80 pounds) during July. The company also plans to launch more price-competitive products in the mid-to-low end of the market. Nomura analyst C.W. Chung says Samsung still has the economies of scale to outlast rivals, adding the smartphone industry will face a consolidation similar to the one in the memory chip industry that the South Korean firm now dominates. "The ones that ultimately survive will then have plenty to be happy about," said Chung. Nomura forecasts the smartphone market will grow from $276 billion last year to $315 billion (177 billion pounds) by 2017, far larger than the DRAM and NAND memory chip markets where Samsung competes. Further, the mobile division will remain an important client for Samsung's components businesses. Use of its own Exynos mobile processors and organic light-emitting diode (OLED) displays in premium devices like the Galaxy S6 boosts its chip and display sales and serves as an advertising billboard for potential customers. "When everybody comes out to dig for gold, jeans and pickaxes are what make money; that's what Samsung's semiconductor business is doing through the smartphone market," said Nomura's Chung. -Reuters