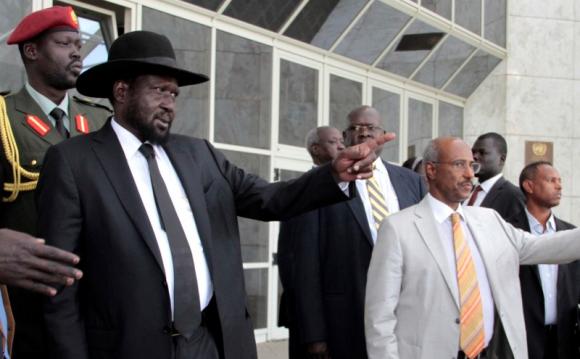 JUBA - South Sudan's President Salva Kiir, fresh from being extended in office for another three years, said on Wednesday the threat of international sanctions would not keep him from retaliating against his rival. Thousands of people have been killed and more than a million have fled their homes since fighting between supporters of President Salva Kiir and former vice president Riek Machar erupted in the world's newest nation in December 2013. Several ceasefires have been agreed and broken since then and both sides accuse the other of violating one announced in early February. "This time, should Riek's forces attack my forces again, I will fight them until they are gone," Kiir told a gathering of youth leaders in Juba. "We will not stop this if the sanctions will be imposed on South Sudan, simply because we are fighting for our self-defense." Peace talks broke down three weeks ago with no date set for their resumption, prompting the mediator to say leaders on both sides were failing in their duty to find peace. Kiir's comments came a day after South Sudan's parliament voted to extend his term in office by three years after the country's June elections were called off. The United States as well as the European Union have imposed sanctions on commanders on both sides. On Tuesday, the United Nations Security Council, which has been considering sanctions for almost a year, threatened to impose sanctions against "senior individuals" for actions or policies that jeopardize security and stability. - Reuters