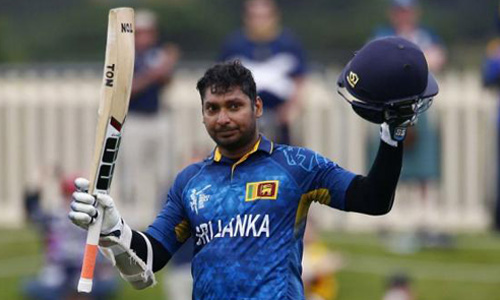 HOBART – Batting first in their final World Cup Pool A match against Scotland on Wednesday, Sri Lanka put up 363 runs for the Scots to chase, owing to tons of Sangakara and Dilshan. Earlier, Sri Lankan captain Angelo Matthews won the toss and decided to bat in the match against Scotland which also serves as an opportunity for the former champions to assess their strength in depth. The 1996 winners, already in the quarter-finals, made three changes to their injury-plagued squad, with Kusal Perera, Dushmantha Chameera and Nuwan Kulasekara replacing Dinesh Chandimal, Upul Tharanga and Sachithra Senanayake. Chandimal was ruled out of the tournament on Tuesday with a hamstring injury. "The wicket looks really nice and hard. We'd put the runs on the board first," Mathews said at toss at Bellerive Oval. "We've been playing pretty good cricket for the past four games and we look to continue to do that in today's game as well." Scotland's limited bowling resources provides a gilt-edged opportunity for Sri Lankan great Kumar Sangakkara to maintain his red-hot form in the tournament. "He is an unbelievable player, isn't he? Scored three hundreds in a row and hopefully can get another one today," Mathews said of Sri Lanka's batting mainstay. Scotland skipper Preston Mommsen also confirmed three changes in the squad and said he too would have liked to bat first. "We'd have batted too, looks a good one day wicket. At the same time, quite a hard ground to defend on. So nothing wrong batting second," said Preston. "It's been an awesome experience, the first four games for us. We played some good cricket, unfortunately, we've not been able to get that win. "Nonetheless, it's relatively new for us playing on the world stage and the boys are savouring every moment of it." Sri Lanka: Lahiru Thirimanne, Tillakaratne Dilshan, Kumar Sangakkara, Mahela Jayawardene, Angelo Mathews, Dushmantha Chameera, Kusal Perera, Thisara Perera, Seekkuge Prasanna, Nuwan Kulasekara, Lasith Malinga. Scotland: Kyle Coetzer, Calum MacLeod, Freddie Coleman, Matt Machan, Preston Mommsen, Richie Berrington, Matthew Cross, Josh Davey, Michael Leask, Alasdair Evans, Rob Taylor. – Reuters