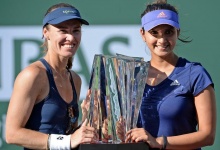 MIAMI – Sania Mirza became the first Indian to climb to the top of the WTA doubles ranking after she teamed up with Swiss great Martina Hingis to claim the Family Circle Cup title. The 28-year-old won her third successive doubles title with Hingis, following triumphs in Indian Wells and Miami, to achieve the top ranking milestone. "When you start off as a child playing tennis, you dream of being No.1 in the world. It’s a dream for every person; very few get there. I feel extremely honoured to be No.1, it’s something that I’ve worked for all my life," Mirza said in a statement. "I hope this makes girls in India believe that anything is possible; we can achieve anything we want if we put our mind and body to it.” Mirza had once been tipped for success as a singles player after she became the first Indian to win a WTA singles title in 2005. She followed up her success in her hometown of Hyderabad by reaching the fourth round of the U.S. Open in 2005 and two years later broke into the top 30. But from then on her singles career went into freefall, with injuries taking a toll. On the doubles court, however, her career prospered as she became the first Indian woman to claim a grand slam title when she partnered Mahesh Bhupathi to the 2009 Australian Open mixed doubles crown. When the new WTA rankings are released on Monday, Mirza's run of winning 14 successive doubles matches with Hingis will see her leapfrog Italians Sara Errani and Roberta Vinci at the top of the standings. "It is a truly remarkable accomplishment for Sania Mirza to become the first Indian woman to reach the WTA World No.1 doubles ranking," WTA Chairman and CEO Stacey Allaster said. "Sania has attained many milestones throughout her successful career and this achievement is a fitting recognition of her talent, dedication and success. "I am sure Sania will continue to create history and inspire our ever-growing fan base in India and the wider Asia-Pacific region." Only three other Asian women have achieved the top WTA doubles ranking: Japan’s Ai Sugiyama, China’s Peng Shuai and Taiwan's Hsieh Su-wei. Leander Paes and Bhupathi are the only other Indians to achieve number one rankings in tennis when they dominated men's doubles in the late 1990s. –Reuters