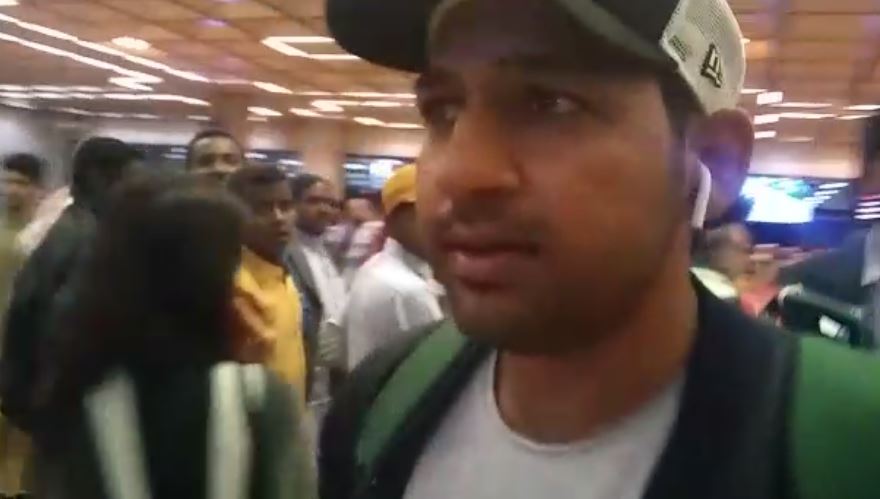 KARACHI (92 News) – Pakistani captain Sarfraz Ahmed arrived in Karachi from South Africa on Tuesday after four matches ban. It is pertinent to mention here that ICC handed Pakistani captain four-match suspension over racist comment. The cricket fans welcomed the Pakistani skipper with raising slogans in support of him at Karachi airport. Speaking to the informal conversations with the journalists at airport, he said, “I am sorry for whatever happened. I made a mistake, apologized and got punishment.” “The Pakistan Cricket Board supported me. The board treated the issue very well,” Sarfraz Ahmed said. “I will improve myself and my performance in the future and I thank my supporters for their backing,” the Pakistani captain said. Lashing out former fast bowler Shoaib Akhtar – who condemned his action as unacceptable for someone leading Pakistan – Sarfraz said that Shoaib was launching personal attacks. To a question about PCB’s decision to recall him, Sarfraz said, “I don’t see anything in it as I was playing cricket for the last five months. I will rest and then play Pakistan Super League,” referring to the league starting in the United Arab Emirates from February 14. Sarfraz gets four-match suspension over anti-racism remarks The ICC suspended Sarfraz Ahmed for four-matches after breaching the ICC’s Anti-Racism Code for Participants. Sarfraz was charged and suspended by the ICC for four international games after accepting that he was in breach of the ICC’s Anti-Racism Code for Participants following an incident that occurred during the second ODI against South Africa in Durban on Tuesday. Pakistani skipper’s was caught via the stump mics making a racist comment against the South African all rounder Andile Phehlukwayo in the Durban ODI. Sarfraz accepted the charge related to ICC’s Anti-Racism Code. “Pakistan captain Sarfaraz Ahmed has been handed a four-match suspension for breaching ICC’s Anti-Racism Code,” ICC tweeted.

Earlier, Pakistan captain apologised for a controversial on-field taunt during Tuesday’s second one-day international against South Africa in Durban. Sarfraz denied that his comments in Urdu, caught on the stump microphones, were aimed at South African all-rounder Andile Phehlukwayo or anyone in particular. “I wish to extend my sincere apologies to any person who may have taken offence from my expression of frustration which was unfortunately caught by the stump mic during yesterday’s game against SA,” the 31-year wrote on his Twitter account.