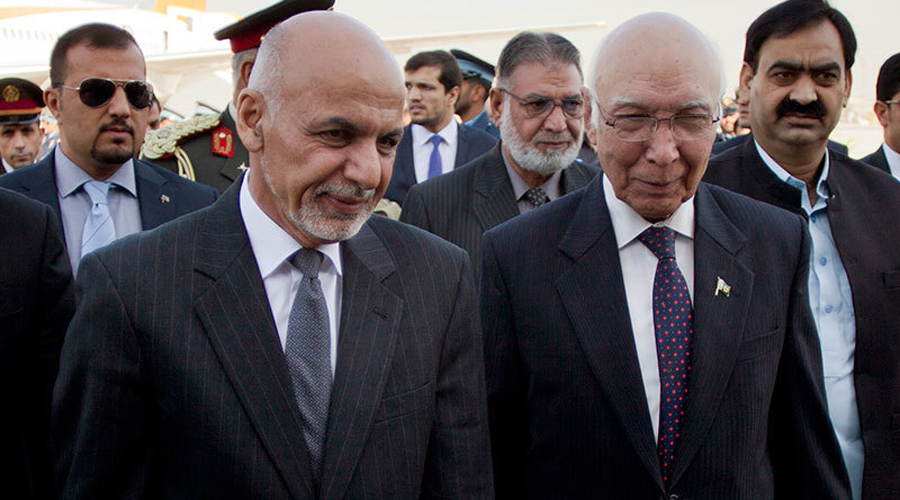 ISLAMABAD (92 News) – Adviser to the Prime Minister on Foreign Affairs Sartaj Aziz called on  Afghan President Muhammad Ashraf Ghani on the sidelines of the Brussels Conference on Afghanistan on Thursday. Discussing efforts for long term peace and stability in Afghanistan, the Adviser reiterated Pakistan's earnest desire for lasting peace in Afghanistan which was important for stability and progress in Pakistan. He emphasized the need for continued engagement and support of international community for sustainable economic development and growth in Afghanistan. The Afghan president thanked Pakistan's pledge of further $500 million economic assistance to Afghanistan at the Brussels Conference, which demonstrated Pakistan's solidarity and support for the Government and people of Afghanistan. He suggested that the two governments should work together to identify the projects in consultation with the Afghan government according to its development priorities. Ghani also appreciated the announcement of a second tranche of 3,000 scholarships for Afghan students in Pakistani universities, which would greatly help institution building in Afghanistan. The Afghan President and Adviser also discussed efforts for peace and reconciliation in Afghanistan. Emphasizing that lasting peace and stability could be achieved through a politically negotiated settlement, Adviser Sartaj Aziz commended the Afghan government and people for concluding a peace deal with Hizb-e-Islami. He expressed hope and optimism that this development could lead to opportunities for similar peace arrangements with other insurgents. Recalling Pakistan's serious efforts for facilitating peace talks between Afghan government and Taliban, Sartaj Aziz conveyed that Pakistan will continue to make these efforts through the framework of the QCG. President Ashraf Ghani expressed concern that Taliban's continued refusal to join the peace process was causing perpetuation of violence, killings and suffering in Afghanistan.