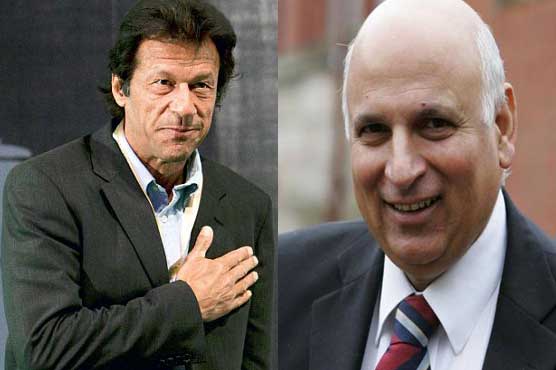 ISLAMABAD: Former governor of Punjab Chaudhry Muhammad Sarwar who met Pakistan Tehreek-e-Insaf chairman Imran Khan on Sunday is likely to be made party’s president soon. Sarwar, who recently resigned as the governor of Pakistan’s largest province citing deep-rooted and rampant corruption as one of the major reasons for his resignation, called on PTI chief here at his Bani Gala residence and stayed with him for over an hour. It was one-to-one meeting that has not gone down well with PTI vice-chairman Shah Mehmood Qureshi, who is reportedly unhappy over Imran’s ‘overtures’ to Sarwar and publicly announcing his willingness to welcome him in the party fold. Sarwar has a clean track record and has special interest in carrying out philanthropist activities, which drove him to leave England and start his political career in Pakistan, but landed in the Punjab Governor House. “Shah Sb wants a frank and open discussion in the party ranks before offering any major slot to the ex-governor but this has not happened so far,” a source close to him said. If Sawar formally joins PTI he will be the second prominent politician of Kashmiri origion to do so after ex-AJK premier Barrister Sultan Mehmood joined Imran’s team. Already Lord Nazir has been appearing in PTI’s rallies and meetings. These three, among other things, can have a deep impact on politics in Kashmir, which primarily revolves around PPP and PML-N, it is believed. Imran and Sarwar exchanged views on the current political scene and the latter apprised his host of the events that led to his quitting as governor of Punjab. Imran appreciated him for this bold decision, it was learnt. The slot of PTI president fell vacant following the resignation of Makhdoom Javed Hashmi in October last year, who had developed differences with Imran over some of his decisions. Imran’s top aide Naeemul Haq has, however, denied outright any differences within the party leadership. Meanwhile, several aspirants have obtained PTI forms for Senate seats and some have even deposited Rs50,000 ‘registration fee’ as well. Prominent among these are veteran bureaucrat and secretary Roedad Khan, Engineer Hamidul Haq Khalil, Azam Swati and Adalat Khan, sources claimed. If he becomes senator, Roedad will be the senior most person to be part of the Senate. Imran has already formed a parliamentary board for scrutiny of the candidates and he will personally interview them before finalising the names and the award of tickets.PTI is expected to bag at least four to five Senate seats in the upcoming elections and this will be its maiden entry into the upper house of Parliament. REPORTS