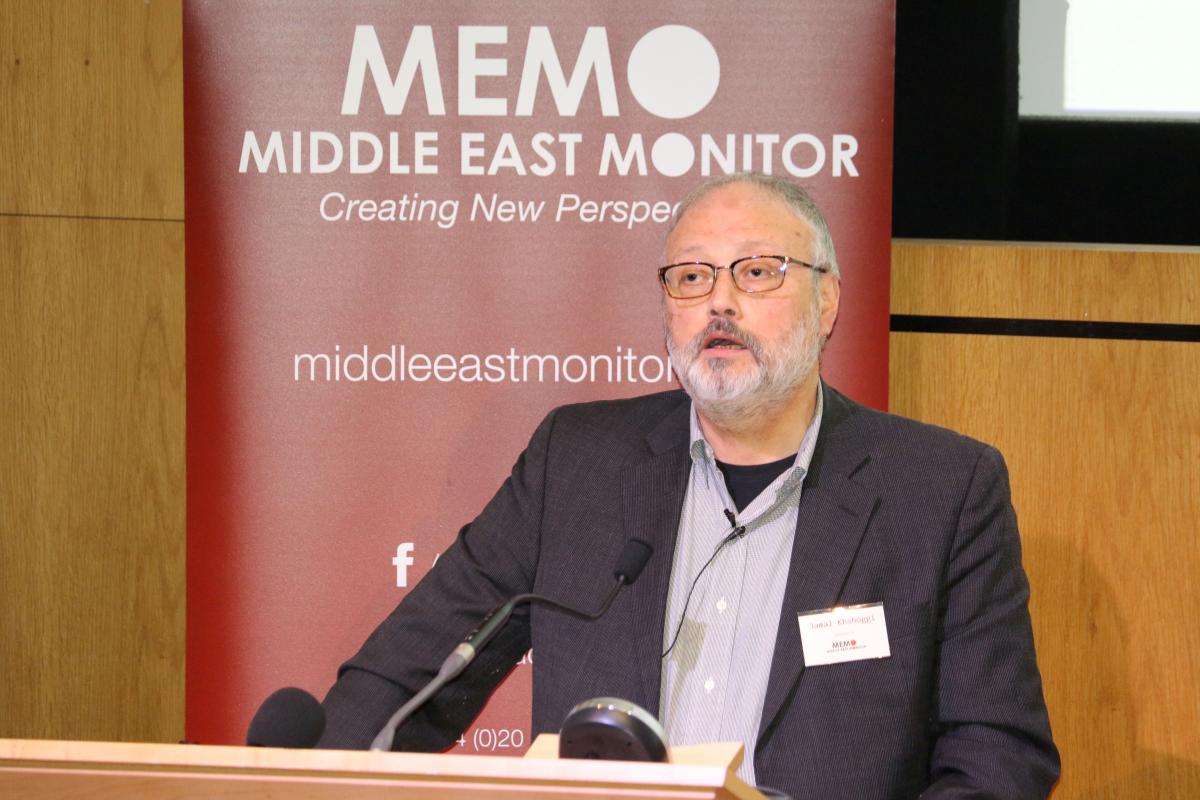 WASHINGTON (Reuters) - Saudi Arabia said that journalist Jamal Khashoggi died in a fight inside its Istanbul consulate and said it had fired two senior officials over the incident, giving an account that US President Donald Trump said was credible. Saudi Arabia’s acknowledgement that Khashoggi died came after two weeks of denials and growing demands from Western allies for an explanation over Khashoggi’s disappearance, which galvanized a global outcry and prompted some US lawmakers to call for harsh action against Riyadh. Saudi state media said King Salman had ordered the dismissal of two senior officials over the incident: Saud al-Qahtani, a royal court advisor seen as the right-hand man to Crown Prince Mohammed bin Salman, and deputy intelligence chief Ahmed Asiri, a statement on state media said. “I think it’s a good first step, it’s a big step. It’s a lot of people, a lot of people involved, and I think it’s a great first step,” Trump told reporters. “Saudi Arabia has been a great ally. What happened is unacceptable.” Though Trump said Riyadh’s account was credible, it drew doubt from some US lawmakers. Khashoggi went missing after entering the consulate on Oct. 2 to obtain documents for his upcoming marriage. Days later, Turkish officials said they believed he was killed in the building, an allegation that Saudi Arabia had, until now, strenuously denied. In a separate statement on Saturday, the Saudi public prosecutor said a fight broke out between Khashoggi and people who met him in the consulate, leading to his death. “The investigations are still underway and 18 Saudi nationals have been arrested,” the statement said. The disappearance of Khashoggi, a US resident and Washington Post columnist, had led to mounting pressure from the West on Saudi Arabia to provide convincing answers. Before the Saudi announcements, Trump said he might consider sanctions, although he has also appeared unwilling to distance himself too much from the Saudis, citing Riyadh’s role in countering Iranian influence in the Middle East and lucrative potential arms deals. The White House said in a statement that it had seen the Saudi announcement and would continue to press for “justice that is timely, transparent, and in accordance with all due process.” But some US lawmakers expressed doubt about the Saudi explanation. “To say that I am sceptical of the new Saudi narrative about Mr. Khashoggi is an understatement,” said Republican US Senator Lindsey Graham, a Trump ally who has been sharply critical of Saudi Arabia over the incident. Democratic US Senator Richard Blumenthal told CNN the Saudi explanation “absolutely defies credibility” and called for an international investigation of Khashoggi’s death. Turkish sources have told Reuters the authorities have an audio recording purportedly documenting Khashoggi’s murder inside the consulate. Turkish pro-government newspaper Yeni Safak has published what it said were details from the audio. It said Khashoggi’s torturers had severed his fingers during an interrogation and later beheaded and dismembered him.

“NO ORDERS TO KILL HIM”

King Salman has handed the day-to-day running of Saudi Arabia to his son, commonly known as MbS. But the growing crisis prompted him to intervene, five sources with links to the Saudi royal family told Reuters. The king has ordered the formation of a ministerial committee headed by the crown prince to restructure the general intelligence agency, state media said . The crown prince had no knowledge of the specific operation that resulted in Khashoggi’s death, a Saudi official familiar with the investigation said. “There were no orders for them to kill him or even specifically kidnap him,” said the official, speaking on condition of anonymity and adding that there was a standing order to bring critics of the kingdom back to the country. “MbS had no knowledge of this specific operation and certainly did not order a kidnapping or murder of anybody. He will have been aware of the general instruction to tell people to come back,” the official said. The official said the whereabouts of Khashoggi’s body were unclear after it was handed over to a “local cooperator” but there was no sign of it at the consulate. In Istanbul, Turkish prosecutors investigating Khashoggi’s disappearance questioned Turkish employees of the Saudi consulate , widening the hunt for clues in a case straining Riyadh’s alliance with Western powers. Turkish police searched a forest on Istanbul’s outskirts and a city near the Sea of Marmara for Khashoggi’s remains, two senior Turkish officials told Reuters, after tracking the routes of cars that left the consulate and the consul’s residence on the day he vanished. Investigators have recovered samples from searches of both buildings to analyse for traces of Khashoggi’s DNA. Speaking to reporters in Scottsdale, Arizona, ahead of the Saudi announcements, Trump said it was too early to say what the consequences for the incident might be, but that the US Congress would be involved in determining the American response. Asked whether Saudi sanctions were one of the measures he was considering, Trump said, “Could be, could be,” though he provided no details. “We’re going to find out who knew what when and where. And we’ll figure it out,” Trump added. Turkey said it had not shared with any country audio recordings purportedly documenting Khashoggi’s murder, dismissing reports it had passed them to the United States. “We will share the results that emerge transparently with the whole world,” Foreign Minister Mevlut Cavusoglu said.