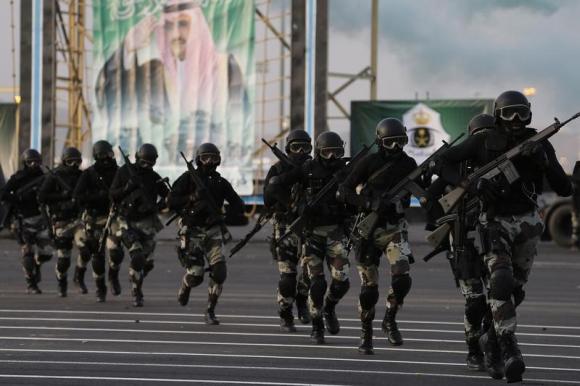 DUBAI - Saudi Arabia overtook India to become the world's biggest weapons importer in 2014, a year when global defense trade rose for the sixth straight year to a record $64.4 billion, research company IHS said on Sunday. The growth in supplies was due to expanding demand from emerging economies for military aircraft and rising tensions in the Middle East and Asia Pacific, IHS, a provider of global market and economic information, said. The United States remained the top defense exporter in 2014, ahead of Russia, France, Britain and Germany, a top-five ranking unchanged from 2013, IHS said in an annual defense trade report. "Growth in Saudi Arabia has been dramatic and, based on previous orders, these numbers are not going to slow down,” an IHS statement quoted its senior defense analyst Ben Moores as saying. Saudi imports rose 54 percent between 2013 and 2014, and based on planned deliveries imports will grow 52 percent to $9.8 billion in 2015, IHS said, without stating the 2014 sales. One out of every $7 spent on defense imports in 2015 will be spent by Saudi Arabia, it said. Saudi Arabia and the United Arab Emirates (UAE) are part of a U.S.-led coalition involved in air strikes on Islamist militants who have carved out an Islamic State in Iraq and Syria. The militants have vowed to topple the governments of Western-allied countries in the Middle East. “When we look at the likely export addressable opportunities at a global level for the defense industry, five of the 10 leading countries are from the Middle East,” Moores said. “The Middle East is the biggest regional market and there are $110 billion in opportunities in the coming decade.” The top five importers in 2014 were Saudi Arabia, India, China, the UAE and Taiwan. The 2013 rankings were India, Saudi Arabia, the UAE, Taiwan and China. Saudi Arabia and UAE together imported $8.6 billion in defense systems in 2014, more than the imports of Western Europe combined, IHS said. The biggest beneficiary of the Middle Eastern market was the United States, with $8.4 billion worth of Middle Eastern exports in 2014 after $6 billion in 2013. The IHS survey does not include munitions, small arms, homeland security or intelligence programs. - (Reuters)