ISLAMABAD (92 News) – Saudi Arabia has rejected reports that it pressurized Pakistan to refrain from participating in the Kuala Lumpur Summit. In a statement on Saturday, the Saudi Embassy in Pakistan described such reports as baseless and fake. 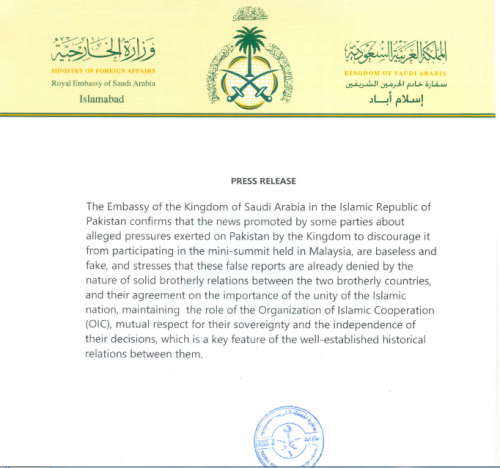 The Saudi Embassy said that relations between Pakistan and the Kingdom of Saudi Arabia are superior to language of threat. It said that the brotherly relations between the two countries are long standing and strategic based on trust, understanding and mutual respect. “The two countries enjoy a consensus of views on most regional and international issues, especially the issues of Islamic nation.” The Saudi Embassy said that Saudi Arabia has always stood with Pakistan in difficult times. “We strive always to stand with Pakistan to be a successful and stable country,” it added. On Friday, Turkish newspaper Daily Sabah had reported that President Recep Tayyip Erdogan said that Pakistan decided to stay away from the recently concluded Kuala Lumpur summit because of Saudi Arabia's threats of economic sanctions. Erdogan said that it was not the first time that Saudi Arabia and the United Arab Emirates (UAE) had put pressure on a country for doing or not doing certain things. “Unfortunately, we see that Saudi Arabia pressures Pakistan. Now, there are promises that the country has given to Pakistan regarding the central bank. However, more than that, there are four million Pakistanis working in Saudi Arabia. They [threaten by saying that they] would send [Pakistanis] back and re-employ Bangladeshis instead,” Erdogan was quoted as saying by the paper. He added that the kingdom has also threatened to withdraw money it had deposited in the State Bank of Pakistan. He said that Pakistan had to comply with the Saudi wishes ‘due to its economic difficulties’. On the other hand in a statement, the Foreign Office spokesperson said that Pakistan did not participate in the Kuala Lumpur summit because ‘time and efforts were needed to address the concerns of major Muslim countries regarding possible division in the Ummah’. "Pakistan will continue to work for the unity and solidarity of the Ummah, which is indispensable for effectively addressing the challenges faced by the Muslim world," he said.