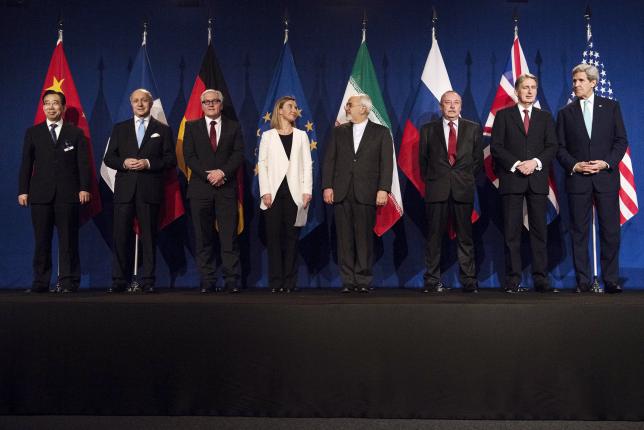 DOHA - Saudi Arabia's cabinet said on Monday it welcomed an interim deal between Iran and world powers over Iran's disputed nuclear program and that it hoped a final deal would rid the region of weapons of mass destruction. Iran and six world powers -- the United States, Britain, France, Germany, China and Russia -- reached a framework agreement on Thursday that would curb Tehran's nuclear research for at least a decade and gradually lift Western sanctions. That deal is contingent on reaching a final agreement in three months. A conservative Sunni Muslim kingdom, Saudi Arabia regards revolutionary, Shi'ite Iran as its biggest regional rival. For 11 days, it has led fellow Sunni Gulf Arab in air strikes against Houthi militiamen allied to Tehran in neighboring Yemen, just one of the region's war zones where the two powers back opposing sides. "The council of ministers expressed hope for attaining a binding and definitive agreement that would lead to the strengthening of security and stability in the region and the world," the statement carried by state news agency (SPA) said. It added that Saudi Arabia hoped a final deal would pave the way for a "Middle East and the Arabian Gulf region free of all weapons of mass destruction, including nuclear weapons." The statement stressed a need for "good neighborliness and non-interference in the affairs of Arab states" -- a likely reference to Iran and its role in civil wars in the Arab world. The kingdom is also concerned that loosening sanctions will enable Tehran to more generously support armed proxies opposed by Riyadh in Syria, Iraq, Lebanon and Yemen. - Reuters