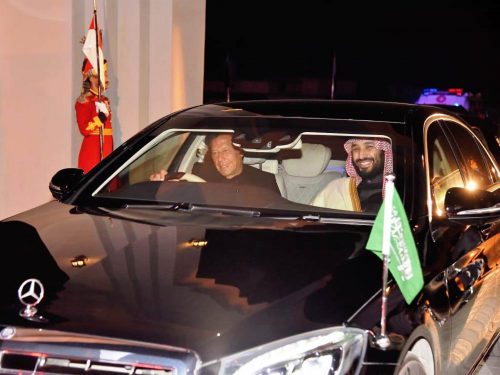 Before his departure, the crown prince shook the farewell hand with the Prime Minister Imran Khan and Chief of Army Staff General Qamar Javed Bajwa. Prime Minister Imran Khan, President Dr Arif Alvi, Chief of Army Staff General Qamar Javed Bajwa, DG ISPR Maj Gen Asif Ghafoor, Information Minister Fawad Ch and Foreign Minister Shah Mahmood Qureshi bid the crown prince farewell at the airbase. Addressing a joint press conference at Nur Khan Airbase, Prime Minister Imran Khan thanked the Saudi crown prince on the release of 2,107 Pakistani prisoners from Saudi jails. “It is a matter of honour to say himself the ambassador of Pakistan,” he said. The prime minister said that Pakistan has a great geo-strategic importance. Saudi Crown Prince Mohammed bin Salman said that Pakistan is making progress under the leadership of Prime Minister Imran Khan. “Pakistan is my home. It will soon become an economic power. It is my duty to release the Pakistani prisoners,” he maintained.