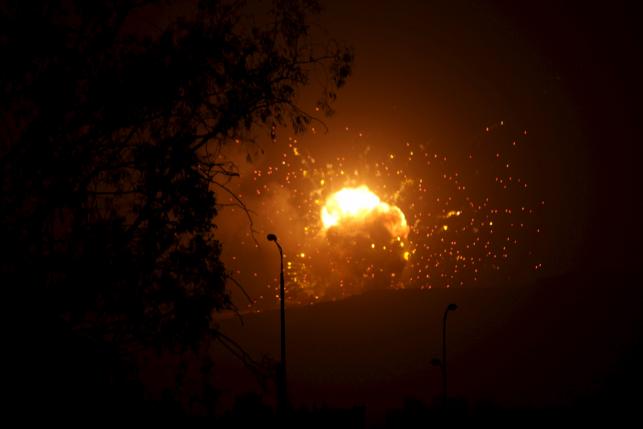 ADEN - Air raids by a Saudi-led coalition again hit Houthi militia targets across Yemenon Monday night, striking the group's northern stronghold of Saadeh, the capital, Sanaa, and the central town of Yarim, residents and media said. "There were huge blazes in the mountains outside Sanaa. It looks like they hit a missile depot and it was on fire for half an hour or so. Then there was anti-aircraft fire until dawn," a Sanaa resident said. The strikes, which began on Thursday, are aimed at stopping the Houthis from taking more territory and pressing them and former president Ali Abdullah Saleh to negotiate a power-sharing deal with President Abd-Rabbu Mansour Hadi. The Houthis are from a Yemeni Shi'ite sect and are allied to Iran, Saudi Arabia's main regional rival. The Saudis and other Sunni Muslim countries in the region fear the advance of the Houthis will ultimately threaten the world's top oil exporter. However, the Houthis and forces loyal to Saleh have continued to advance on the southern port of Aden, the last big center still under control of Hadi, who left Yemen on Thursday and is now in Riyadh with other members of his government. Shooting continued in Aden during the night, a Reuters reporter said. If the Houthis took the city, it would represent a significant defeat for the Saudi-led coalition, which has repeatedly said protecting the presence of Hadi's government there is a major objective. An air strike on Monday killed at least 40 people at a camp for displaced people in northernYemen, humanitarian workers said, in an attack apparently aimed at the Houthis. Saudi Arabia's military spokesman said he could not confirm a camp had been hit, but said jets might have returned fire on anti-aircraft weapons placed in civilian areas. Hadi's foreign minister, Riyadh Yassin, blamed Houthis for the explosion. Qatar-based Al Jazeera television reported air raids at an army camp in Saadeh, while Saudi-owned Al Arabiya reported raids on the Red Sea port of Hudaida. A Sanaa resident said strikes had also hit Sanaa's international airport. Beirut-based al-Maseerah television, which is linked to the Houthis, reported that raids struck a gas plant in the central town of Yarim, killing eight people and wounding another 28. In Riyadh, the campaign's spokesman, Brigadier General Ahmed Asseri, on Monday showed footage of air strikes hitting what he said were Yemeni army tanks under Houthi control as well as arms depots he said were held by the militia. A U.S. official said the Saudis had shown little appetite for a ground invasion if it can be avoided. "The objective here is to get to a point where the Houthis halt their destabilizing actions and come back to the table," the official said.