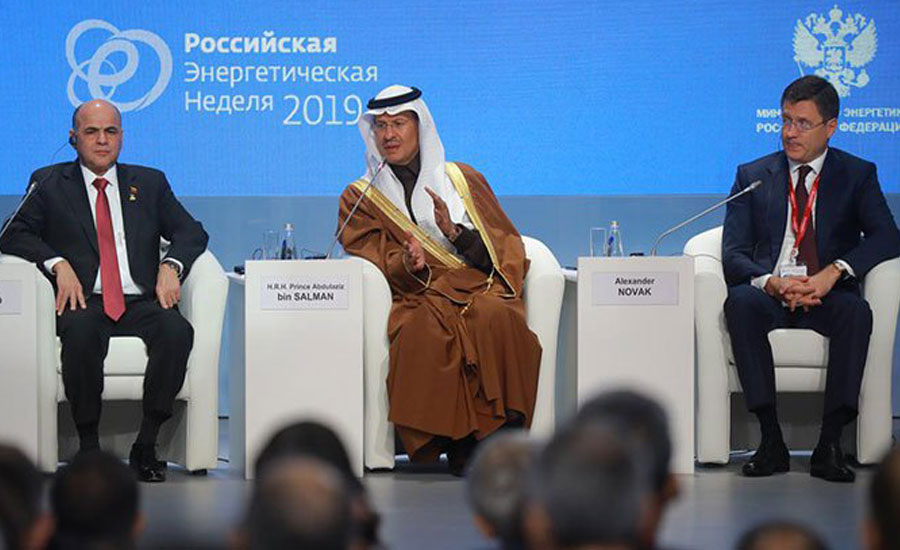 MOSCOW (Web Desk) – Saudi Energy Minister Prince Abdulaziz Bin Salman said that the oil-rich kingdom had restored oil production to levels seen before the attack on its oil facilities last month. “It has fully restored oil production to almost 10m barrels a day following the attacks on two of its key facilities last month, weighing on crude prices and sending them to the lowest level since August,” he said. According to a report in the Saudi daily Saudi Gazette, Prince Abdulaziz was speaking on the third day of the Russia Energy Week being held in the Russian capital of Moscow. “We are even beyond 9.9 million barrels per day (bpd) of stabilized production capacity, we are at 11.3 million barrels per day and as we have said before by end of November we will be back up and running,” the prince was quoted as saying. The Sep 14 attacks on the Saudi oil giant Aramco had temporarily interrupted the supply of an estimated 5.7 million barrels of crude oil per day — around five percent of global supply. “By our agreement with OPEC+ we should have been producing 10.3 million barrels per day, we elected to voluntarily cut our oil production to lower level than that,” the prince told the energy gathering. OPEC and allied producers led by Russia, a group known as OPEC+, agreed last year to cut oil supply by 1.2 million barrels per day (bpd) to support prices. The cuts came into effect on Jan. 1. “I want to move on... we in the energy industry in Saudi Arabia, we have got a few challenges, we have got an IPO and we want to make sure it’s a successful IPO,” Prince Abdulaziz said.

Energy leaders from across the world have convened in Moscow for a week to discuss matters ranging from the global energy outlook to challenges in the development of renewable energy. On the second day of the Russian Energy Week, a featured panel on maintaining energy connectivity in an unstable world saw Prince Abdulaziz and Novak highlighting the future demand.