ISLAMABAD (92 News) – Saudi State Minister for Foreign Affairs Adel al-Jubeir called on Prime Minister Imran Khan at PM House on Thursday. They discussed the Pak-India tension and situation in the region. . He also conveyed the message of Saudi Crown Prince Mohammed Bin Salman. Earlier, he was welcomed at the Ministry of Foreign Affairs' office by Foreign Minister Shah Mahmood Qureshi he arrived in Pakistan. 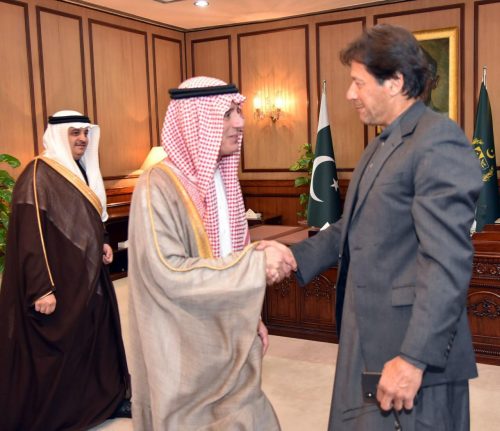 They discussed the current situation in the region, as well as other matters of common interest including economics, politics and security. In today's meeting, the Saudi minister assured Foreign Minister Qureshi of Saudi Arabia's complete and overwhelming support towards solving the issues with India in a peaceful manner. The minister is visiting Pakistan on the instructions of Saudi Crown Prince Mohammad bin Salman. When making the announcement regarding the minister's visit, Qureshi had told reporters that the Saudi envoy is coming to Pakistan with a special message from Prince Mohammad bin Salman. The state minister, who was earlier supposed to visit Pakistan on March 1, is also expected to meet Prime Minister Imran Khan. Last month, crisis gripped the region with the intrusion by Indian Air Force jets into Pakistani airspace following the killing of Indian troops in a suicide blast in India-occupied Kashmir. Two intruding IAF jets were later downed by Pakistan and a pilot was captured only to be released as a unilateral goodwill gesture. Amidst rhetoric by Indian officials in the aftermath of the attack, Pakistan had called back its high commissioner in India for consultations on Feb 18. The high commissioner will be returning to New Delhi today. On Wednesday, the Pakistani foreign minister had thanked Saudi Arabia, among other countries, for their contribution in easing the situation between India and Pakistan.