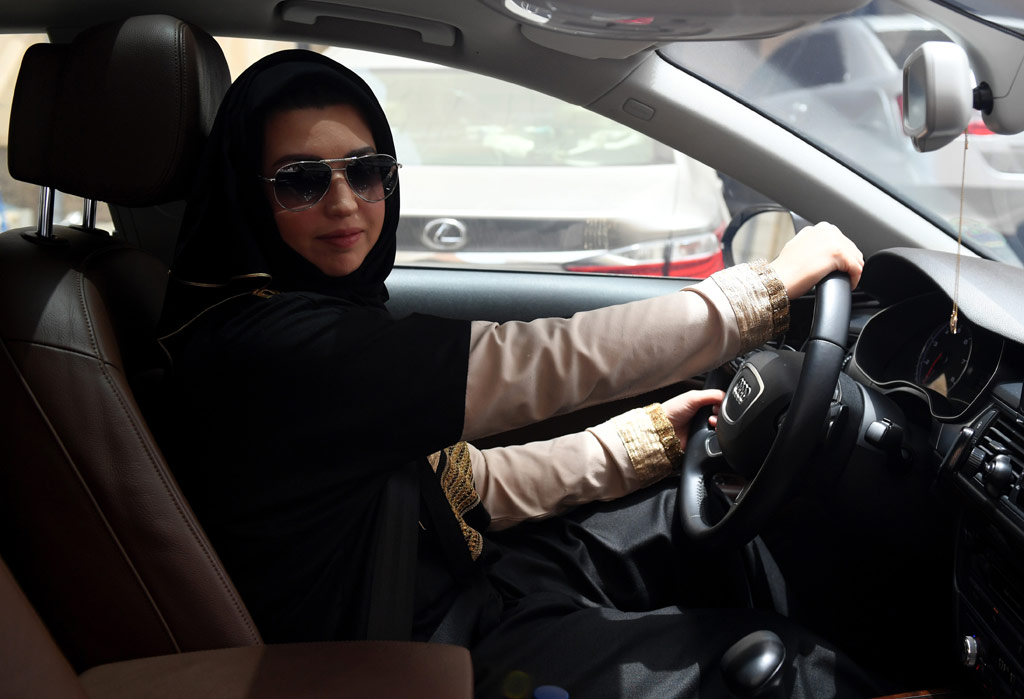 RIYADH (AFP) – Saudi Arabia allowed women to drive from Sunday, overturning the world's only ban on female motorists, a historic reform that is expected to usher in a new era of social mobility. The lifting of the ban, which follows a sweeping crackdown on women activists, is part of Crown Prince Mohammed bin Salman's reform drive to modernise the conservative petrostate. Potentially thousands of female drivers are set to take the wheel as the desert Kingdom ends the decades-old ban, long a glaring symbol of repression against women. "It is a historic moment for every Saudi woman," Sabika al-Dosari, a Saudi television presenter who drove minutes after the ban was lifted in the eastern city of Al-Khobar, told AFP. The move is expected to be transformative for many women, freeing them from their dependence on private chauffeurs or male relatives and resulting in big family savings. "Those days of waiting long hours for a driver are over," Hatoun bin Dakhil, a 21-year-old pharmacy student, told AFP. "We no longer need a man." Earlier this month, the Kingdom began issuing its first driving licences to women in decades, with some swapping their foreign permits for Saudi ones after undergoing a practical test. Some three million women in Saudi Arabia could receive licences and actively begin driving by 2020, according to consultancy firm PricewaterhouseCoopers. A handful of female driving schools have cropped up in cities like Riyadh and Jeddah, training women to drive cars and also Harley Davidson motorbikes — scenes that were unimaginable even a year ago. Many Saudi women have ebulliently declared plans on social media to drive their mothers for coffee or ice cream as soon as the ban ends on Sunday, a mundane experience elsewhere in the world but a dazzling novelty in the desert Kingdom. Moderate Islam For decades, hardliners cited austere Islamic interpretations to justify the driving ban, with some asserting that women lack the intelligence to drive and that lifting it would promote promiscuity. The decision to lift the ban was catalysed in large measure by what experts characterise as economic pain in the Kingdom owing to a protracted oil slump. The move is expected to boost women's employment, and according to a Bloomberg estimate, add $90 billion to economic output by 2030. Many women fear they are still easy prey for conservatives in a nation where male "guardians" — their fathers, husbands or other relatives — can exercise arbitrary authority to make decisions on their behalf. The government has preemptively addressed concerns of abuse by outlawing sexual harassment, with a prison term of up to five years and a maximum penalty of 300,000 riyals ($80,000). Prince Mohammed, appointed heir to the most powerful throne in the Middle East a year ago this month, has also lifted a ban on cinemas and mixed-gender concerts, following his public vow to return the Kingdom to moderate Islam. But much of the initial optimism over his reforms appears to have been dented by a sweeping crackdown on women activists who long opposed the driving ban. Authorities have said that nine of 17 arrested people remain in prison, accused of undermining the Kingdom's security and aiding enemies of the state. 'Unrelenting crackdown' The detainees include three generations of activists, among them 28-year-old Loujain al-Hathloul, also held in 2014 for more than 70 days for attempting to drive from the neighbouring United Arab Emirates (UAE) to Saudi Arabia, and Aziza al-Yousef, a retired professor at Riyadh's King Saud University. State-backed newspapers have published front-page pictures of some of the activists, the word "traitor" stamped across them in red. This week, the Human Rights Watch (HRW) said the Kingdom has arrested two more women activists — Nouf Abdelaziz and Mayaa al-Zahrani, in what it denounced as an "unrelenting crackdown". Even some of the prince's ardent supporters have labelled the crackdown a "mistake". It has been seen as a calculated move both to placate clerics incensed by his modernisation drive and also to send a clear signal to activists that he alone is the arbiter of change. "If the authorities give credit to the women who championed lifting the driving ban, it means conceding that reforms can be won through activism, and then the Saudis may demand more," HRW said this week.