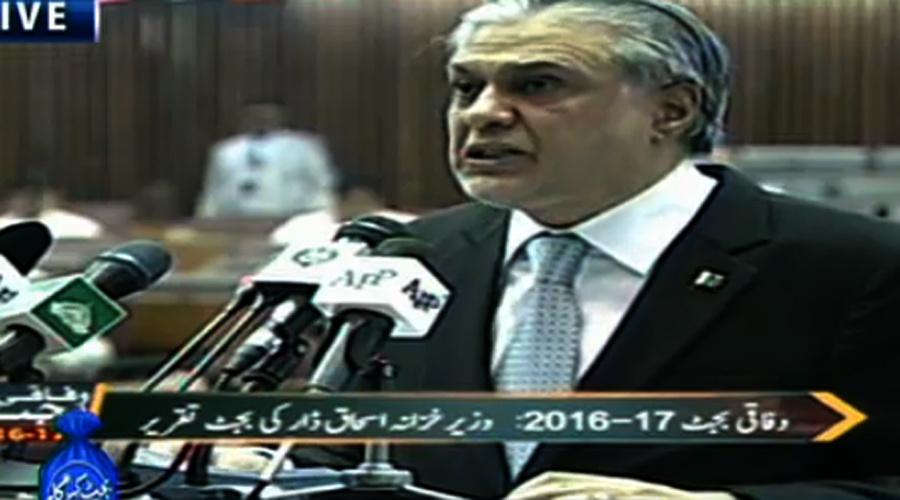 ISLAMABAD (92 News) – Finance Minister Ishaq Dar has said that they have saved the country from bankruptcy. Unveiling the budget for FY2016-17 on Friday, he said that challenges being faced by the economy had vanished and the country was heading towards progress. He said that they had devised a clear-cut strategy before the elections 2013. The minister said that the economic growth was estimated at 4.71 percent. “The economy would have strengthened more had the country not suffered the loss of cotton,” he said. He said that the inflation rate was 2.82 percent. “We will achieve the taxes collection target of Rs 3104 billion. The policy rate of State Bank of Pakistan has touched 5.4 percent,” he said. Ishaq Dar said that the machinery export had increased by 40 percent. He announced a 10 percent increase in salaries of government employees and pensions. He also increased the minimum salary from Rs 13,000 to Rs 14,000 per month. The minister announced a 25 percent increase in the pensions of former government employees aged over 85. He said that the export re-finance was being brought to 3pc. “Five industrial sectors, including textile, leather, carpet, export and surgical instruments, are being made zero rated with regard to the export,” he said. Ishaq Dar also proposed to fix the urea fertilizer at Rs 1400 per bag and reduce DAP from Rs 2,800 to 2,500 per bag. “The agriculture loans target is being made Rs 700 billion.” He announced to end customs duty on fish and shrimps in addition to sales tax on agriculture medicines. The minister also announced to increase withholding tax on the print and electronic media from 1 percent to 1.5 percent. He, however, announced that exemption of custom duty and sales tax on the import of the news print would continue. He increased the stipend under the Benazir Income Support Program (BISP) to Rs 1,800. Finance Minister Ishaq Dar said that Rs 115 billion would be allocated for the BISP, which would benefit over 5.6 million families. He said that new lines would be laid in Balochistan and Khyber Pakhtunkhwa. He announced that Rs 32 billion has been allocated for the Bhasha Dam, while Rs 380 billion for energy projects and Rs 188 billion for the construction of roads and bridges.