ISLAMABAD (92 News) – The Supreme Court has fixed hearing of a case pertaining to the alleged fake degree of Lahore National Accountability Bureau (NAB) Director General Shehzad Saleem. A three-member bench would hear the case on November 12 on a petition filed by a citizen amid concerns that the official had secured a ‘fake’ degree case against Shehzad Saleem. However, the court would hear the case on November 12, while a fake degree case had been filed by a citizen. The court also issued notice to the petitioner. On the other hand, the NAB spokesperson rejected the issue relating to the fake degree of Shehzad Saleem declaring as ‘fake news’. The spokesperson said that the degree of the NAB official was attested from Higher Education Commission (HEC) which was issued in 2002. He further mentioned that these techniques cannot put a pressure on the NAB’s proceedings. Following to the Opposition’s privilege motion moved to National Assembly against the NAB director general Lahore, the NAB spokesperson replied that Opposition Leader in Punjab Assembly Hamza Shehbaz and Khawaja brothers can criticize against the NAB outside the houses. “Shehbaz Sharif can open drive against NAB inside the house. The PML-N leaders can present their point of view during talk shows against the anti-graft watchdog. So in the same way, the NAB can give his stance on the media,” the NAB spokesperson explained. On the interview of NAB DG Lahore, the NAB chairman summoned all the records from the PEMRA. According to the spokesperson, the purpose of bringing records of the interview only to precedes the matter as per law. He further said that it would be reviewed the privillage of MNAs was hurt or being blamed only after examining the interview content of Shehzad Saleem. 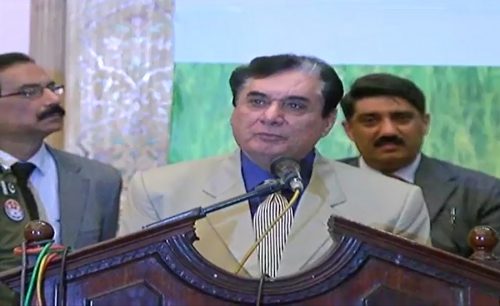 Earlier, opposition parties heaped scorn on the NAB official for conducting a media trial of politicians and submitted a privilege motion in the National Assembly. The motion stated that DG NAB Lahore Saleem Shahzad had given interviews to multiple news channels with the consent of the NAB chairman. “The NAB Lahore DG provided details of the matters that are sub-judice and maligned the reputation of opposition members in the National Assembly,” the motion said. 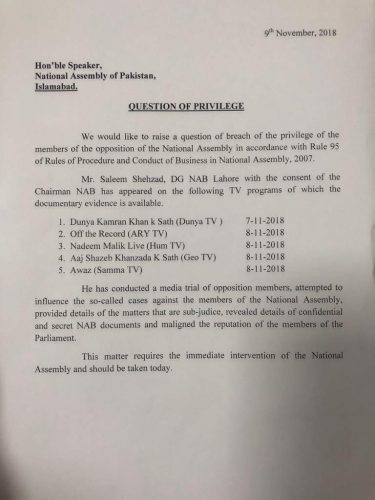