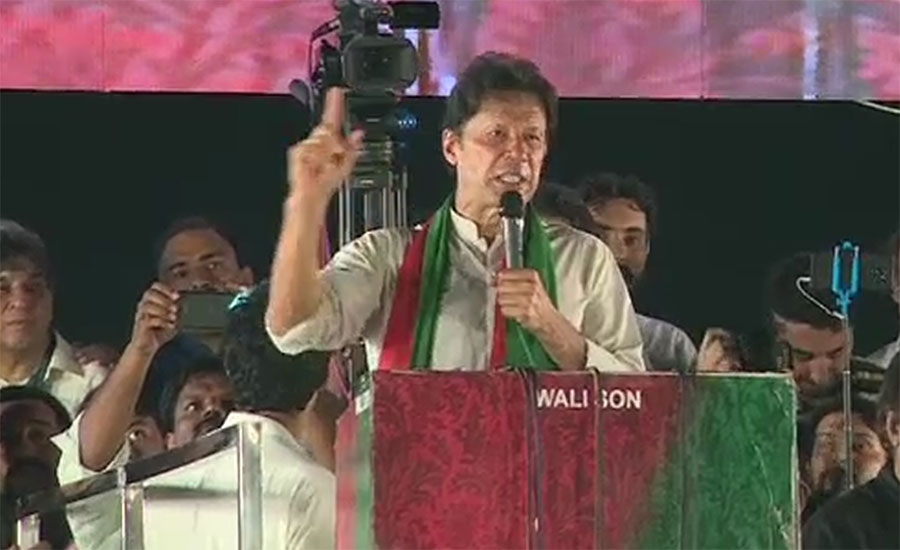 ISLAMABAD (92 News) – Pakistan Tehreek-e-Insaf (PTI) chief Imran Khan has said that Supreme Court (SC) laid foundation of ‘new Pakistan’. He addressed Youm-e-Tashakur rally in the federal capital. Khan said that there is going to come a day when we would not be able to find people to give Zakat. He said that getting yourself residences in countries is a paltry dream. Khan said that government schools should provide quality and free-of-cost education. PTI wishes to see a legal system in Pakistan where the impoverished are further burdened with bribes to get their routine matter done whereas the financially stable persons are relaxed in more ways than they already are. Khan said that he proudly claims that National Accountability Bureau (NAB) in PTI’s tenure would function without influences. PTI chief said that once he earns people s mandate, he should be held responsible if corrupt people are not held accountable. After PTI comes to power, Khan said that governor houses in Lahore and Peshawar would be turned to guest houses, parks, libraries or anything that is for the public. He said that PTI’s government would curb unemployment, better governance and steer Pakistan out of debt. Khan said that Pakistani expatriates have billions of Dollars to invest but they would trust Pakistani markets once the system is bettered. He said that he is proud of the fact that government recruitments in Khyber Pakhtunkhwa are done through NTS system. He said that PML-N could not find any premier nominee but Shehbaz Sharif. PTI chief said that democracy doesn t entail ruling families like that of Sharifs. He said that PML-N is being ruled by one family and workers have to defend its corruption. Khan said that he would resign from party leadership in case any one of his stances in courts is proved false. He said that Asif Ali Zardari is next up for accountability. Dr Yasmin is set to defeat Shehbaz Sharif in Lahore, he claimed.