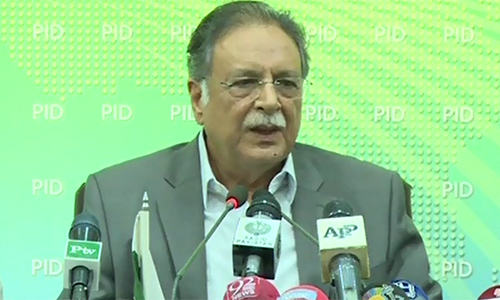 ISLAMABAD (92 News) – Federal Minister for Information and Broadcasting Pervaiz Rashid has said that the Supreme Court verdict saved the honor of Jahangir Tareen. Addressing a press conference on Tuesday, he said that Jahangir Tareen had to suffer a defeat at the hand of a young candidate of the PML-N. He said that PTI’s criticism of court verdicts is pathetic. The minister said that Imran Khan’s dream of creating hurdles and derailing democracy would not be fulfilled. “Jahangir Tareen has promoted a new industry of recycling, laundry, washing and ‘lotacracy’,” he added. Pervaiz Rashid said that Jahangir Tareen’s lawyer is creating hurdles and wishing escape from the election. He said that the PTI candidate in NA-122 earned billions and gave donation in millions, while paid income tax in lacs.