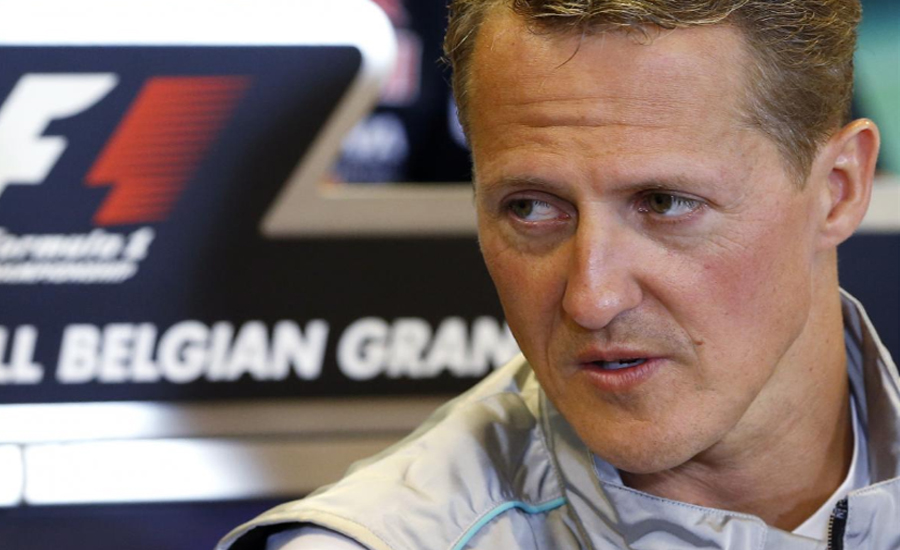 LONDON (Reuters) – Michael Schumacher is in Formula One’s thoughts as the seven times world champion approaches his 50th birthday, five years on from the near-fatal skiing accident that has left the Ferrari great fighting brain injuries behind a wall of secrecy. The German, still the sport’s most successful driver in terms of wins (91) and titles, will reach his half century on Jan. 3. Formula One’s focus will be on highlighting the remarkable career and talents of a man whose fame stretched well beyond the racetrack, and who enthused a legion of fans in the 1990s and early years of this century. The Ferrari museum in Maranello, Italy, is planning a special exhibition, opening on his birthday and lasting for a few months, “both as a celebration and a mark of gratitude to the most successful Prancing Horse driver ever.” Mercedes, the last team Schumacher drove for in Formula One before retirement in 2012, will have some of his cars on display at their museum in Stuttgart. Formula One management will also dedicate a week to Schumacher on its social media platforms, including exclusive interviews with many of those who were part of the German’s Formula One story. “We are going to celebrate Michael’s birthday,” said a spokesman. Schumacher remains a big part of the sport’s narrative, with Mercedes driver Lewis Hamilton now a five times world champion with 73 wins and getting ever closer to the German’s greatest records. Hanging over it all, however, will be a strong sense of sadness — just as every anniversary since his Dec. 29, 2013, fall while skiing off piste near Meribel in the French Alps with his family. Schumacher hit his head on a rock and spent months in an artificial coma after being rushed to hospital in a critical condition. “We think a lot about him,” Mercedes motorsport head Toto Wolff told Reuters. “He was an exceptional sportsman, and he’s missed. “As a seven times world champion he’s missed within the paddock, he’s missed as a consultant to us, somebody we’ve been looking up to. We hope that his recovery continues to be positive and that’s the most important thing.” Just how positive, or otherwise, is a matter of considerable conjecture and one met with resolute silence from his wife Corinna, the family and those who always formed part of Schumacher’s innermost circle. They would prefer the world remembered Schumacher as the champion he was, rather than the different kind of fighter he has become. Sabine Kehm, Schumacher’s trusted assistant and spokeswoman who now also manages the racing career of his son Mick, continues to guard his privacy with polite but firm determination. “In general the media have never reported on Michael and Corinna’s private life,” she said in 2016. “When he was in Switzerland, for example, it was clear he was a private individual. “Once in a long discussion Michael said to me, ‘You don’t need to call me for the next year, I’m disappearing.’ I think it was his secret dream to be able to do that some day. That’s why now I still want to protect his wishes in that I don’t let anything get out.” It is clear that if Schumacher were to have made a miraculous recovery, the good news would have been known quickly enough. The fact nothing has been said, in itself speaks volumes. Amid enduring media speculation, be it rumoured moves for treatment elsewhere or concerning Schumacher’s general mobility, any shred of bona fide information from behind the walls of the family’s lakeside Swiss mansion is news. One such snippet was provided by Swiss archbishop Georg Ganswein, who told the mass-circulation German magazine Bunte recently about a 2016 visit to Schumacher. “I sat opposite him, held his hands and looked at him. His face is just as we know it, the typical Michael Schumacher face. Only a bit fuller,” he said. “He feels that loving people are around him and care for him and, thank God, keep the all too curious public away. A man who is sick needs discretion and understanding.” Jean Todt, Schumacher’s former Ferrari boss who is now president of Formula One’s governing body, is a frequent visitor. He revealed last month that he had watched this year’s Brazilian Grand Prix with Schumacher. “There are pictures of him all over my offices and apartments. The time with Michael will always be remembered as the best of my life,” the Frenchman told reporters.