DUBAI (92 News) – The ODI win over England will give Scotland confidence in two-match series against the top-ranked T20I side in the world. The Grange Cricket Club was the stage for one of the great one-day international matches, and results, on Sunday 10 June as Scotland first put up a mammoth 371/5 and then held on to beat England by six runs. The home boys will be back in the middle on Tuesday, and then Wednesday, to try and ride on the high from the England win and put it past Pakistan in a series of two Twenty20 Internationals, which will wind up the visitors’ tours of Ireland, England and Scotland. 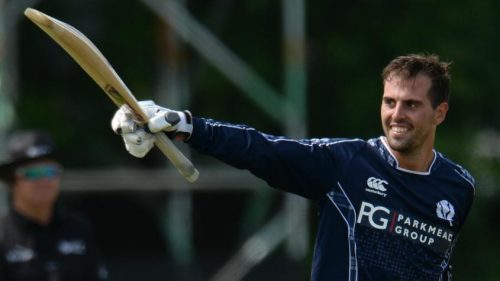 It’s a different format, but one in which Scotland have a decent record: 18-23 in 45 games. But, though it happened over a decade ago, they lost their only T20I against Pakistan back in Durban in the ICC World T20 2007, when Pakistan slammed 171/9 and bowled Scotland out for 120. 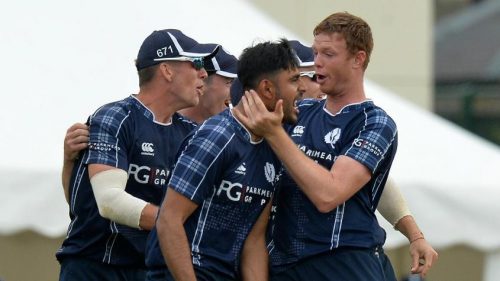 More crucially, Pakistan are the No.1 side in the MRF Tyres ICC T20I Team Rankings while Scotland are at No.11, and that might stand for something when the teams go out in the middle. Having said that, Scotland have just defeated the No.1 ODI side in the world. For Scotland, the disappointment of missing out on a spot in the ICC Cricket World Cup 2019 couldn’t have been papered over by the win over England, but as Calum MacLeod, their star of the win with a 94-ball 140*, said, “this was a special day; it is up to us now to build on it”. That’s what they will go out and try to achieve against the top team in the world, with the playing XI for the England game all available to choose from. MacLeod was the hero of the memorable triumph, but Matt Cross (48), captain Kyle Coetzer (58), Richie Berrington (39) and George Munsey (55) all got good runs in the game and will hope to put up strong shows against Pakistan too. Among the bowlers, in a match where 736 runs were scored in 98.5 overs at an overall rate of 7.4, Mark Watt (5.50), Alasdair Evans (6.25) and Safyaan Sharif (7.22) held their own, and that is a good sign for Scotland too, enough to give them confidence especially in home conditions. 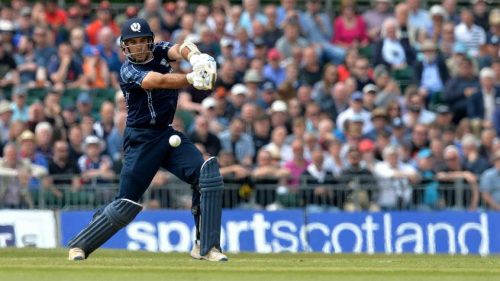 For Pakistan, it has been a largely successful tour, though the international action has so far been restricted to Test cricket. They first beat Ireland in the home side’s maiden Test match by five wickets and then took a 1-0 lead in the two-Test series against England with a nine-wicket win at Lord’s, before going down by an innings and 55 runs at Headingley. Now, off the field since the end of the second Test on 3 June, they have two more days of action before finishing up, and they will want to do it on a high. The squad wears a very different look to the one that played the Tests, with Ahmed Shehzad in there as well as the very experienced Shoaib Malik and the rookie Shaheen Afridi, among others. With Shehzad, Fakhar Zaman, Malik, Haris Sohail, Hussain Talat and Sarfraz Ahmed, the captain, in as frontline batting options, there is a strong line-up there. The bowling is fronted by Shadab Khan, the No.2 bowler in the world in the format, and Mohammad Amir, No.13 on the same list. Them aside, there are Hasan Ali, Rahat Ali, Afridi of course, and others to pick from, and an all-rounder in Faheem Ashraf, leaving Ahmed and coach Mickey Arthur with a lot of options. Pakistan’s expertise in the format is formidable but Scotland have the home advantage, and are coming in on the back of one of their more famous wins, and that should make the two T20Is excellent contests. Calum MacLeod (Scotland):MacLeod, 29, is an outstanding ODI batsman, having scored seven centuries in 57 games to date, many of them big ones like the one against England. He doesn’t have quite the same numbers in T20 cricket but can be very explosive on his day and if he gets going, there’s a good chance he will be around till deep in the innings and help Scotland put up a good score. Shadab Khan (Pakistan): Leg-spinners are gold dust in T20s, and 19-year-old Khan is among the best in the business, having picked up 24 wickets in 16 internationals at an economy rate of 6.28. He has been on song while on tour too, the 10-for in the tour game against Northamptonshire a superb effort. Since then, he has hit half-centuries in all three Tests and bagged seven wickets. The ODI against England went off without interruption, and while rains have been forecast for Edinburgh on the Monday, Tuesday and Wednesday are expected to be rain-free. That should work well, and the track at Grange – if nothing changes – should give batsmen plenty of reasons to smile. Squads Scotland: Kyle Coetzer (c), Richie Berrington, Dylan Budge, Matt Cross, Alasdair Evans, Craig Wallace, Michael Leask, Calum MacLeod, Hamza Tahir, George Munsey, Safyaan Sharif, Chris Sole, Mark Watt, Brad Wheal, Stuart Whittingham. Pakistan: Sarfraz Ahmed (c), Fakhar Zaman, Ahmed Shehzad, Haris Sohail, Shoaib Malik, Asif Ali, Hissain Talat, Faheem Ashraf, Shadab Khan, Mohammad Nawaz, Mohammad Amir, Hasan Ali, Rahat Ali, Usman Shinwari, Shaheen Afridi.