Seattle home tied to Disney's 'Up' movie fails to sell at auction: media 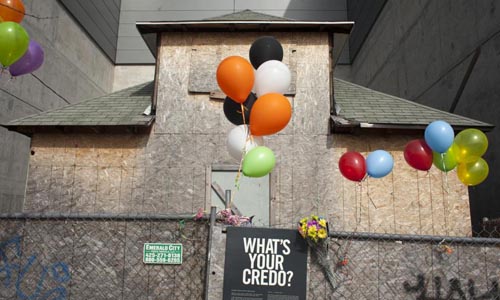 Seattle home tied to Disney's 'Up' movie fails to sell at auction: media

SEATTLE (Reuters) - A century-old Seattle house that was featured in a marketing stunt to publicize Walt Disney Co's balloon adventure movie "Up" because it is wedged in the middle of a modern development failed to attract any bids at an auction on Friday, local media reported. Edith Macefield drew national media coverage when she refused in 2006 a $1 million offer for her 1,000-square-foot house from an investment company that eventually developed a 131,000-square-foot retail and office center around the home. She died in 2008 and willed her house to a construction superintendent she had befriended. He sold the house in 2009. The house became famous after publicists for the "Up" movie tied a cluster of balloons to the little two-story bungalow in 2009 to market the Disney-Pixar movie about a curmudgeonly old man who refuses to sell his home and flies off in the house tied to balloons. The movie made more than $700 million at worldwide box offices and won an Oscar for the best animated movie in 2010. The company that now owns the boarded-up house owes nearly $186,000, prompting the auction of the house, Seattlepi.com reported, adding Friday's opening bid was set at $216,270.70. None of five interested bidders ultimately placed a bid for the house at the auction on Friday, making its future uncertain and leaving it in the hands of a bank for now, newspaper website Seattlepi.com reported. On Friday, a handful of people came to see the house, one who was there out of concern it might be torn down, and a bouquet of flowers and an assortment of floating balloons were attached to a chain link fence in front of the house. A Facebook event page inviting people to "bring a balloon" on auction day had more than 100 guests who said they were going to view the house.