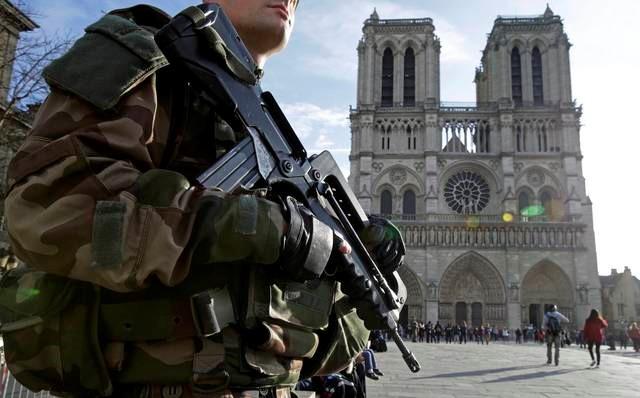 PARIS - French police investigating the discovery of a car packed with gas cylinders near Notre Dame cathedral in Paris have arrested a second couple and also established that the vehicle contained three jerry cans of diesel fuel, a judicial source said. The discovery last Saturday night of the Peugeot 607 loaded with seven gas cylinders, six of them full, triggered an inquiry by counter-terrorism experts in a country where more than 200 people have died in attacks over the past year and a half. Police sources said on Tuesday that no detonator device was found in the car, but the presence of diesel-filled cannisters added to concerns that there had been a plan to explode the vehicle. The two arrests late on Wednesday takes to four the number held in custody by police, who are also trying to find the 19-year-old daughter of the car's owner. A first couple, aged 34 and 29, were arrested on a motorway on Tuesday in southern France. The Peugeot was found in the early hours of Sunday morning on a Seine riverside road meters from the Notre Dame cathedral. Documents with writing in Arabic were also found in the car, which had no registration plates and was left with its hazard lights flashing. The car owner was taken into custody earlier this week but later released. He had gone to police on Sunday to report that his daughter had disappeared with his car, officials said. His daughter, officials say, is known to police for wanting to leave for Syria, where scores of religiously radicalize people of French and other nationalities have joined the ranks of the Islamic State militant group. France remains on maximum alert after calls for attacks oncountry, which is taking part in bombing the militant group's bases in Iraq and Syria. Thousands of extra police and soldiers have been deployed to patrol sensitive sites since 130 people were killed by Islamist gunmen and suicide bombers in attacks on Paris last November. A state of emergency declared at that time is still in place and gives police extra search and arrest powers but debate still rages over security after another attack in July in which a man drove a truck into crowds in the city of Nice, killing 86. -Reuters