RAWALPINDI (92 News) – Chief of Army Staff General Qamar Javed Bajwa on Thursday said that the security forces defeated terrorism with the support of nation. According to the Inter Services Public Relations (ISPR), the army chief was addressed on “Security of Pakistan” at the three-day international conference at Air University in Islamabad on “Radicalisation: Perceptions, Realities and Challenges of Campus. During his address, General Bajwa highlighted internal and external challenges to national security of the country and his vision of enduring peace in Pakistan and the region. The army chief said that the full spectrum of threat demands comprehensive national response involving all state institutions. 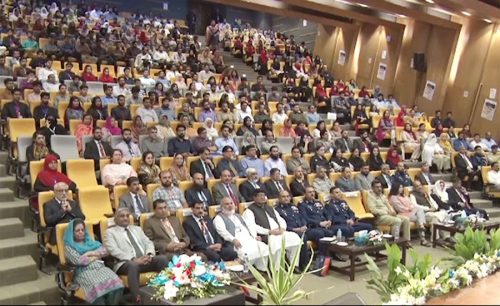 “Armed forces and the nation have sacrificed a lot to bring back stability across the country. Terrorism has been eliminated with the nation’s support but we need to remain vigilant and follow the correct course to move from survival to revival,” the COAS mentioned. The ISPR said that the army chief also underscored Pakistan’s resolve and determination to confront global phenomenon of terrorism and extremism and cleanse Pakistan of the menace. “The army will keep doing all that is required of us for provision of secure environment for sustained socio-economic progress,” Gen Bajwa added.