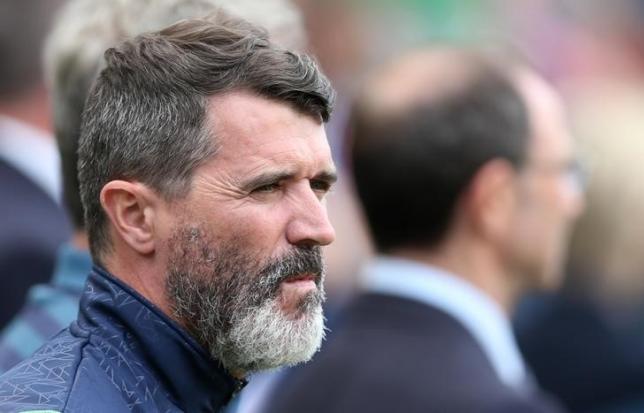 LONDON - Arsenal are not capable of winning the Premier League title this season because they have too many players interested in selfies and six packs rather than winning football matches, according to former Manchester United captain Roy Keane. Keane, a fire and brimstone midfielder, won seven Premier League titles as a player and enjoyed particularly competitive relationship with Arsenal and their similarly combative captain Patrick Viera. The current Ireland assistant manager, however, said he saw little in the current Gunners side to convince him that they are poised for a first league title since their Viera-led 'Invincibles' team in 2004. "Arsenal have some really good players -- some good characters who roll their sleeves up," Keane told the Mail on Sunday. "But they also have one or two players who are more interested in selfies and six-packs, guys who are trying to get their pictures taken every day of the week. "Every year we hear the same thing about Arsenal being contenders. Instead of focussing on the Premier League, it's all about how their bodies look, how their hair is, more so than winning football matches." Arsenal, under manager Arsene Wenger, have become one of the most dazzling attacking sides in Europe but a perceived lack of leadership has undermined their ability to make a sustained title challenge for a number of years. Back-to-back FA Cup triumphs ended their nine-year trophy drought but for too long the north Londoners have not been relevant during the intense 38-game toil of a Premier League season. Last season, under Jose Mourinho, Chelsea -- built around a strong spine of hard-working, physical players -- stifled their closest rivals to canter to the league title and Keane said the Stamford Bridge side remained the benchmark in the upcoming season. "For me, Chelsea remain the team to beat," the 43-year-old added. "Their team is the one with the strongest spine -- John Terry, their goalkeeper (Thibault Courtois), Eden Hazard -- and if they can add (Everton's England defender) John Stones to their team then they will be even harder to beat. "The bottom line is that if Chelsea's players show the same hunger and desire that they did last year then they'll win the league. They will only be in trouble if they are complacent." -Reuters