ISLAMABAD (92 News) – National Institute of Maritime Affairs (NIMA) organized one-day seminar on Kashmir at Pakistan Navy War College, Lahore. This seminar was held in connection with the Maritime Security Workshop-2019 being organized by Pakistan Navy. The NIMA organized one-day seminar on the theme ‘Kashmir Issue – Revocation of Articles 370 and 35A of Indian Constitution: Implications for Regional and Global Security’. Azad Jammu & Kashmir (AJK) President Sardar Masood Khan graced the occasion as the chief guest during the first session whereas Kashmir Committee Chairman Syed Fakhar Imam was the chief guest for the second session. The seminar aimed at bringing together policy makers, academia and media personnel to join hands in highlight the atrocities and outrages being perpetrated by the Indian armed forces in Indian Occupied Kashmir (IoK) and the threat it poses to regional peace and its implications for the global security at large. While addressing the audience, Sardar Masood Khan said that India's actions of 05 Aug 19, were a clear violation of international laws and Geneva Convention. He appreciated the efforts of the management of NIMA for holding the seminar for creating awareness about Kashmir and expressed the hope that other universities and institutes across Pakistan would follow suit to promote the just and right cause of our Kashmiri brethren. 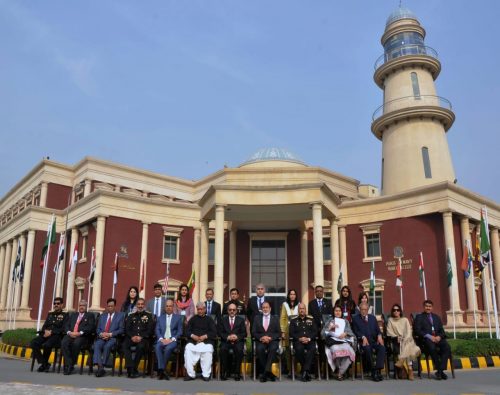 During the second session, Syed Fakhar Imam said that Kashmir issue can only be resolved as per the aspirations of Kashmiri people. He underscored that it is the responsibility of the UN to have a peaceful resolution of Kashmir dispute. He also demanded the international community to play its due role to curb the deteriorating situation in IoK. Earlier, Director General NIMA, Vice Admiral (Retd) Abdul Aleem in his welcome address while highlighting the worst kind of state sponsored oppression being exercised in IoK, said that India had launched 5th generation proxy war against Pakistan and is bent on jeopardizing the stability of the whole region. During conduct of the seminar, eminent speakers from various domains including Justice (rtd) Nasira Javed Iqbal, Ambassador (rtd) Arif Kamal, Islamabad Policy Research Institute president, Vice Admiral (rtd) Khan Hasham Bin Siddique, Associate Dean for the Faculty of Business Administration IBA, Dr Huma Naz Baqai and Editor the Nation, Saleem Bukhari discussed in details various aspects of the Kashmir issue and its implications for the region and beyond. The Seminar was attended by a large number of dignitaries, officers of Armed forces, academia, and researchers from local think tanks, media representatives, and faculty & students of Bahria University.