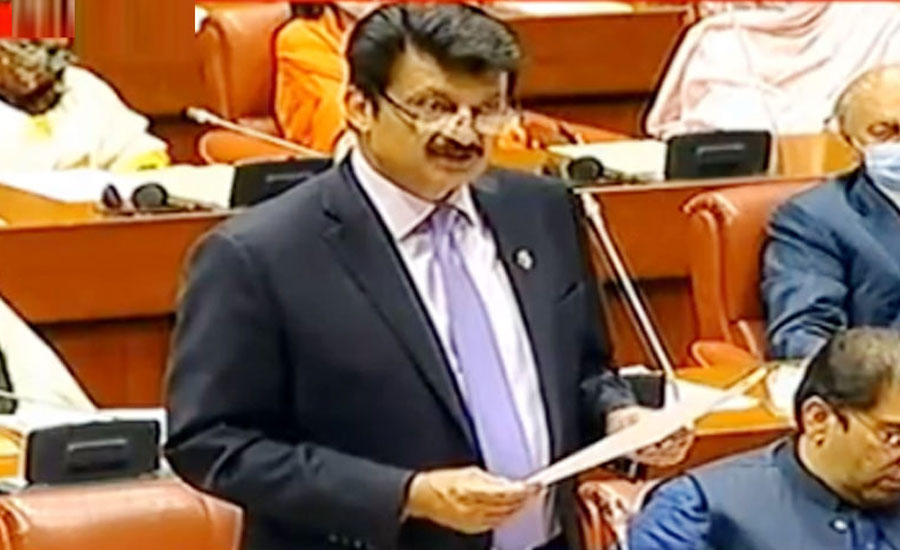 The resolution moved by Leader of House Dr Shehzad Waseem, also expressed its deep resentment at the hypocrisy and double standards of various countries, whose condemnation is missing but still talk of humanity; despite being complacent with the aggressor. It said we reject any attempt to equate the aggressor Israel with the victims of aggression, the Palestinian people as it is not a conflict rather a one-sided war.

The Senate welcomed the government's initiative to dispatch humanitarian assistance to the encircled people of Gaza. The House also urged the international community to take immediate effective and concrete steps to save Palestinian people from further anguish and miseries at the hands of fascist Israeli war machine.

These steps must include lifting of the blockade in Gaza, sending shipments of humanitarian supplies to the people of Gaza, urge cessation of Israeli aggression, sending independent observer teams to Gaza, contributing to the reconstruction and rebuilding of Gaza, and initiating war crimes trials against Israeli occupation army for their crimes in Gaza and Jerusalem.

Palestine facing nothing less than genocide

The House clarified that Palestine is facing nothing less than genocide, massacre and ethnic cleansing. Israel is an apartheid state and guilty of war crimes and settler colonialism. Only a two-state solution is acceptable with total withdrawal of Israel from all occupied Arab territories, including Jerusalem and the establishment of an independent homeland for Palestinians with Al-Quds Al-Sharif as its capital.

The Senate warned against the dangerous repercussions of Israel’s unrestrained and barbaric aggression against Palestinian civilians as well as complete disregard for the sanctity of Al-Aqsa mosque. It deplored the obfuscation of facts and politicization of the situation by a few quarters, creating false equivalence between the Palestinian victims and Israeli aggressors to justify Israel’s attack against Palestinian civilians.

The House reaffirmed Pakistan’s unwavering support for the realization of the right to self-determination and other fundamental rights of the Palestinian people as well as for the two-state solution based on the pre-1967 borders and a free, secure, viable, independent and contiguous State of Palestine with Al-Quds Al-Sharif as its capital.

Israel’s compliance with the UN resolutions

The House expressed that Pakistan stands shoulder to shoulder with the struggle of the Palestinian people and salute the valour, heroism, and sacrifices of the Palestinian people, including children. It urged all parliaments in the world to take note of war crimes being committed by Israel in occupied Palestine and by India in occupied Kashmir and to understand that there is no inextricable linkage of peace, security in the world with the just and peaceful resolution of these lingering conflicts in occupied Palestine and the Indian occupied Jammu and Kashmir.

The chair directed to translate text of the resolution in leading international languages including French, Arabic and Spanish and send copies of the document to global parliaments.

Earlier, the House resumed discussion on Israel’s systematic assault against Palestinian worshippers at the Al-Aqsa Mosque during Ramadan and Israeli apartheid state terrorism and mass murder in Palestine, as well as the ongoing violent and illegal occupation of Palestinian lands.

Taking part in the discussion, Sardar Shafique Tareen said it is obligatory for the world, especially the Muslim Ummah to extend all possible assistance to the oppressed Palestinians. He said the world needs to go beyond passing resolutions and issuing condemnation statements for the resolution of the Palestine issue.

Musaddik Malik said the world has to shun neutrality to resolve outstanding issues like Palestine. He said reconciliatory resolutions passed by the United Nations and other world bodies have made no difference in stopping bloodshed, violence, and inhumanity in Palestine and Kashmir. He said the world has to act proactively in upholding human rights and values.

Mian Raza Rabbani urged the Muslim Ummah to take practical steps against oppression and suppression, continuing against the people of Palestine for several decades. He said the Muslim world should need to see the trauma witnessed by the Palestinian children as a result of Israeli brutality.

Peace in Middle East not possible without resolving Palestine issue

Foreign Minister Shah Mehmood Qureshi has said durable peace in the Middle East is not possible without resolving the Palestine issue.

Speaking in the Senate, while responding to various points raised by lawmakers, he stressed the need for evolving international consensus to formulate a comprehensive strategy to solve the Palestine issue. He said Pakistan played a vital role in achieving a ceasefire in Gaza to protect precious human lives of the Palestinian people.

The minister said the cabinet has approved to send humanitarian assistance to help our Palestinian brethren.

Withdrawal of US troops from Afghanistan

Regarding withdrawal of US troops from Afghanistan, he said Pakistan has consistently been saying that there should be a responsible and orderly withdrawal to avoid any security vacuum. He said Pakistan is part of solution and not the part of problem and the world has acknowledged this now. He said Pakistan will continue playing its positive role in facilitating the Afghan Peace Process.

Meanwhile, the House will now meet on Thursday at 4pm.