On Serbian airwaves, a battle for heart of Balkans 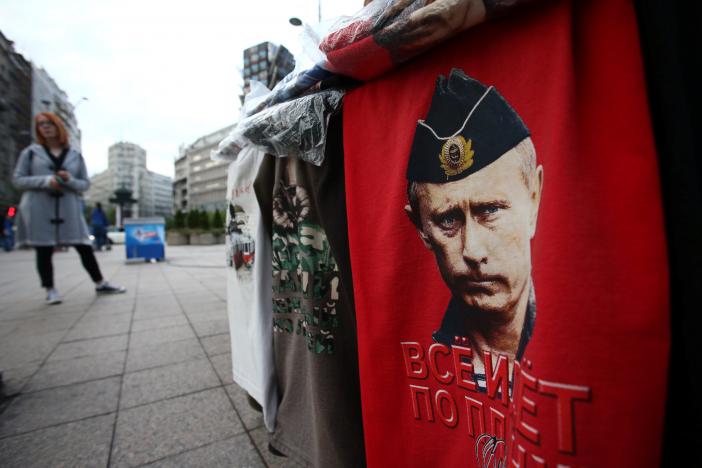 On Serbian airwaves, a battle for heart of Balkans

BELGRADE - The 21st-floor offices of Studio B boast an unrivaled view of the Serbian capital, taking in Orthodox Church domes, a Gulf-financed property development and a citadel built by Celtic, Roman, Ottoman and Austro-Hungarian rulers.

Studio B displays a similarly broad spectrum of influences.

Anyone tuning in to the radio on April 7, the morning after US cruise missiles struck an air base belonging to Syria's Russian-allied military, would have heard two very different versions of what went on.

According to the first, Donald Trump ordered the action to distract attention from investigations into suspected contacts between his associates and Russia before he became president.

The second had Western capitals welcoming the strikes as retaliation for a chemical weapons attack launched by President Bashar al-Assad's forces.

The contrast can be dizzying, and speaks to a battle for public opinion in Serbia, the biggest of the seven states to emerge from the ashes of Yugoslavia and the key to a region feeling neglected by Europe and exposed to Russia.

"You have two diametrically opposed points of view," said Ivana Vucicevic, editor-in-chief of Studio B. "That way we can satisfy the broad spectrum of people who listen to us."

"I believe every news item has an element of subjectivity," she added. "Maybe it's a good thing that we have one and the other and the listeners can judge."

The station's programming mirrors the political balancing act being pursued by Serbian Prime Minister and President-elect Aleksandar Vucic in the nation of about seven million people.

He advocates membership of the EU, but plays to the affection felt by many Serbs for fellow Orthodox Russia. Many in his conservative support base are suspicious of the West and NATO since the bloody breakup of Yugoslavia and NATO's 1999 air war against Serbia over its then province of Kosovo.

While the government has quietly taken cooperation with NATO to the highest level for a non-member, it has rebuffed pressure to join Western sanctions on Moscow over Ukraine and accepted Russian gifts of humanitarian support and MiG-29 fighter jets.

In September, Serbia will take part in war games organised by a Moscow-led security bloc under the banner 'Unbreakable Brotherhood'. Even then, it plans a series of joint military and police training drills with the United States.

Serbs are just as divided, with little under half supporting EU membership. Vucic's advocacy of EU accession is under strain from waning enthusiasm for further enlargement from some countries within the bloc.

The programming of Studio B, like fellow media company B92, reflects the shifting sands of Serbian society and politics.

As a radio station in the 1990s, B92 was a renowned beacon of resistance to strongman President Slobodan Milosevic and a big beneficiary of Western funds from the United States and European powers in support of independent media. Through a network of affiliated stations, it rebroadcast the Serbian-language news of the BBC World Service in an effort to break the diet of Milosevic propaganda.

The donations from Western countries dried up with Milosevic's fall in 2000, however, and the BBC closed its Serbian service in 2011. B92 now exists primarily as a national TV station as well as a website which is one of the most popular in the region and regularly carries Sputnik stories.

"The donors left overnight," said Sasa Mirkovic, one of B92's original founders when it launched as a radio station in 1989 and now a lecturer in media law, adding that B92's republishing of Sputnik stories was merely "a reflection of the political reality".

In 2003 the station began rebroadcasting Radio Free Europe and was approached by Sputnik in 2014, at a time when it was struggling with shrinking state subsidies and staffing and was happy for the extra cash and content. It was privatised in 2015.

Serbia is a "springboard" to the rest of the Balkans, where Serbian is widely spoken or understood and Belgrade wields considerable influence, according to Dimitar Bechev, a non-resident senior fellow at the Atlantic Council, a Washington-based international affairs think-tank, and an expert on the region.

Sputnik, the latest global news player to court Serbia, was launched three years ago, saying it would provide an alternative view of world events to Western mainstream media.

The news agency, which produces content in 30 languages, is owned by the Rossiya Segodnya media company, which in turn is owned by the Russian government. Like Radio Free Europe and the BBC, it says it is an independent news outlet free of government interference.

Sputnik in Moscow declined a Reuters request to interview the editor-in-chief of its Serbian service or to answer emailed questions.

In Serbia, where it has a staff of 30 in Belgrade, it has replicated the model applied by Western media trying to reach listeners in the 1990s, paying first Studio B and later Radio Novosti to rebroadcast its 30-minute news bulletins and reaching a network of some 20 Novosti-affiliated stations around the country.

B92's website, like other portals or print media, carry Sputnik stories for free. Sputnik's online articles are republished hundreds of times a week.

Some Sputnik stories appeal to those Serbs suspicious of the West, NATO and Albanians - the largest ethnic group in Kosovo. One story on the Sputnik Serbian-language website in April said ethnic Serbs in Kosovo should "sleep with one eye open" because of the threat from Albanian extremists. Another reported on Russian deminers working in Serbia under the headline: "NATO bombs us, Russia clears".

"It's not very difficult to mould Serbian public opinion on many of the issues the Russians care about – it's low-hanging fruit," said Bechev.

In what Bechev said spoke to a "soft-power contest" in the region, the BBC World Service announced last month it was reopening its Serbian-language branch as a digital portal, funded by the British foreign office and targeting Serbian speakers across the region. -Reuters