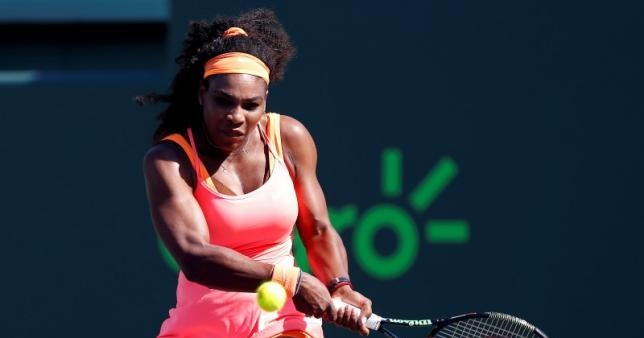 MIAMI - World number one Serena Williams comfortably beat 15-year-old CiCi Bellis 6-1, 6-1 while Romanian third-seed Simona Halep and Italian Flavia Pennetta also progressed at the Miami Open on Sunday. Williams, a seven-times winner at Miami, lost just eight points in the 12 games she won, with Californian Bellis holding serve just once in each set. The 19-times grand slam winner said she had to put out of mind her admiration for Bellis, who is rated as one of the most promising young Americans. Bellis had beaten 29th seed Zarina Diyas on her way to the third round. "She's young, and her being an American and her just doing so well, you want to see people like her do well," Williams said. "So when you're up against them, you have to kind of put that aside, even though I'm always cheering for her. But I have to put it aside and just play the match. "If you break down her age and ability and how well she handled the moment, it was good." Williams will face Svetlana Kuznetsova in the fourth round after the Russian upset 13th seed Angelique Kerber of Germany 6-3, 3-6, 6-3. Romanian Halep, fresh from her title win at Indian Wells last week, beat Italy's Camila Giori 6-4, 7-5 to make the last 16 at Miami for the first time. Halep won despite being broken when serving for the match at 5-4 up in the second. The third-seed will face Italy's Pennetta who defeated two-time Miami winner Victoria Azarenka 7-6(5), 7-6(6). Pennetta has won all three of their previous meetings. - Reuters