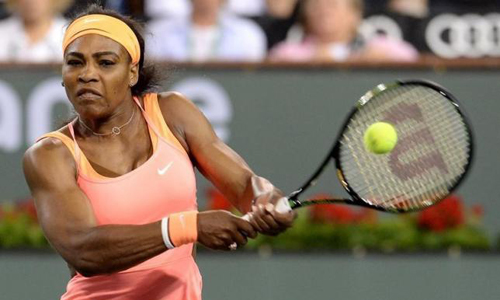 MIAMI - Serena Williams put aside her knee injury to begin her bid for an eighth Miami Open title with a 6-3 6-1 win over Romania’s Monica Niculescu at Key Biscayne on Saturday but sixth seed Eugenie Bouchard was upset by German qualifier Tatjana Maria. Williams withdrew from her semi-final at Indian Wells last week with the knee injury and said upon arriving in Miami that this tournament would involve ‘managing pain’. But the 19-times Grand Slam winner was too much for Niculescu, ranked 70th in the world. The match was scheduled for Friday but was postponed following a rainstorm in South Florida. Niculescu, making ample use of her effective slice and playing some clever tennis, forced a series of entertaining rallies but Williams was always in control. Canadian Bouchard lost 6-0 7-6(4) to Maria. Bouchard was outplayed in the first set, but provided a strong fightback in the second taking a 5-3 lead. But Maria, whose last win over a top ten opponent was five years ago against Li Na, rallied to take the set and match. “It is the best win I have ever had,” said Maria, “I just didn’t think she was comfortable against my style." Maria has returned to tennis after giving birth to a daughter 15 months ago and has worked her way back to the tour via the ITF circuit. Fourth seed Caroline Wozniacki battled past Estonian Kaia Kanepi and into the fourth round, winning a tough match in windy conditions 4-6 6-1 6-3. Germany’s Angelique Kerber beat Britain’s Heather Watson 7-5 3-6 6-4 while Italy’s Sara Errani defeated Russian Anastasia Pavlyuchenkova 6-1 7-6(5). - REUTERS