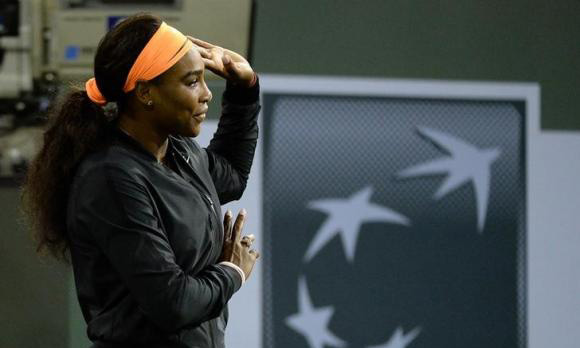 MIAMI - Serena Williams practiced on Wednesday for the first time since a knee injury forced her to withdraw before her BNP Paribas Open semi-final last week but has not lowered her expectations for the Miami Open. Williams, who as the top seed in Miami earned a first-round bye, is scheduled to play Romanian Monica Niculescu on Friday and the world number one has accepted that she will simply have to deal with some discomfort. "I hit some balls today for the first time. I mean, it's okay. I know I'm going to have to manage the pain. I think you just have to figure out the best way around it," Williams, who has seven titles at Key Biscayne, told reporters. "I don't want to put too much pressure on it before then. "I'm here in Miami, so I'm going to go for it and see what happens. I love this tournament, I love Miami, so we will see." Williams, who had returned to the BNP Paribas Open for the first time since winning the event in 2001, said last week that she would not be able to give her all for the remainder of the tournament and decided to pull out. Her opening match against Niculescu, ranked 70th, will be a rematch of the BNP Paribas Open where Williams trounced the Romanian 7-5 7-5 in the second round. Despite having to manage her pain, Williams, who lives in South Florida, was not lowering her expectations going into a tournament that boasts nine of the world's top-10 women players. "I definitely don't have low expectations. I definitely expect to do the best that I can," said Williams. "Whether that's winning or just stepping out on the court, that's what I'm going to have to do. I don't feel any pressure because I've won this title a few times, so I feel good about being here." - REUTERS