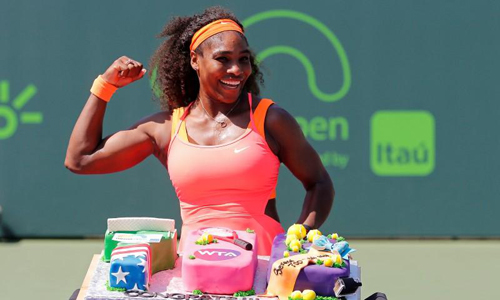 MIAMI - World number one Serena Williams overcame a dreadful second set to beat Germany's Sabine Lisicki 7-6 (4) 1-6 6-3 on Wednesday for her 700th career win and a berth in the Miami Open semi-finals. Williams, who is seeking an eighth Miami title, will next face the winner of Wednesday's later match between Romanian third seed Simona Halep and American Sloane Stephens. After a sluggish start, Williams went on to secure the first set in a tiebreak and then broke her 27th-seeded opponent in the opening game of the second set before falling apart. Lisicki's precise and intelligent play took advantage of a series of unforced errors from Williams as the German won six consecutive games to force a decisive set. But Williams, the two-times defending Miami champion, quickly rediscovered her form and broke to get a 3-0 lead and held firm for the win. Williams is the eighth player in WTA history to record 700 match wins, putting her in an exclusive club that is led by Martina Navratilova (1,442). - REUTERS