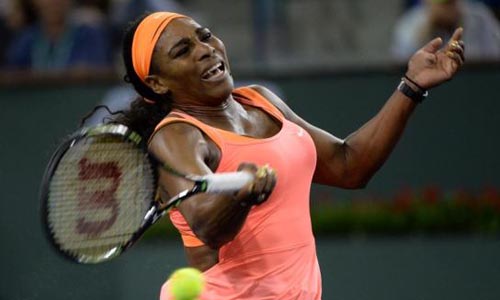 CALIFORNIA (Reuters) - Serena Williams returned to Indian Wells on Friday after a 14-year boycott due to racist abuse she suffered in the 2001 final and got her bid for a third BNP Paribas Open title off to a winning, though somewhat error-prone, start. On a sultry evening at the Indian Wells Tennis Garden in front of a sell-out crowd, the American world number one overcame a nervous start on the stadium court to battle past Romania's Monica Niculescu 7-5 7-5 in the second round. Poland's Agnieszka Radwanska, the seventh seed and a losing finalist at Indian Wells last year, had a much easier time of it earlier in the day, storming into the third round with a 6-3 6-1 demolition of American Alison Riske. Williams said she was overwhelmed by the reaction coming back to play at the venue and that Niculescu's style had taken some getting used to. "I have never played anyone like her, and I was struggling to find my rhythm," she said in a courtside interview after being repeatedly thwarted by an unorthodox opponent who used a heavily sliced forehand. "It was a really tough match." Williams had skipped the showpiece event after winning her second title here in 2001, beating Kim Clijsters in a final marred by some spectators who booed and heckled the American and her family. The heckling was in apparent response to Serena's sister Venus having withdrawn from their semi-final that year just minutes before the match. "It feels overwhelming, walking out and having everyone here cheering me," she said. "It's been really worth it, coming back here." Williams, watched by her mother Oracene and sister Isha, was broken in the opening game and trailed 0-2 before gradually finding her range. She won the next three games but was broken again in the seventh, then trailed 3-5 before clawing her way back with a mixture of power serving and blistering ground strokes, helped by several unforced errors by the Romanian. Spurred on by shouts of "Come on Serena" and "Go Serena" from the crowd, the American won four games in a row to take a topsy-turvy opening set in an hour. After trading early service breaks in the second, Williams finally sealed victory on her fourth match point when her opponent netted a backhand, ending an encounter that lasted just over two hours. Earlier in the day, Radwanska broke Riske twice in the opening set and three times in the second to triumph in just over an hour. "I started very well," Radwanska said after hitting 15 winners on a hot afternoon at Indian Wells. "I'm in trouble the end of the first set but I also finished very well, so that's the most important thing." The Polish world number eight will next meet England's Heather Watson, who beat Camila Giorgi of Italy 7-5 7-5. In other matches, third seed Simona Halep of Romania fought back to beat Russian Daria Gavrilova 2-6 6-1 6-2, while eighth-seeded Russian Ekaterina Makarova breezed past compatriot Elena Vesnina 6-4 6-0.