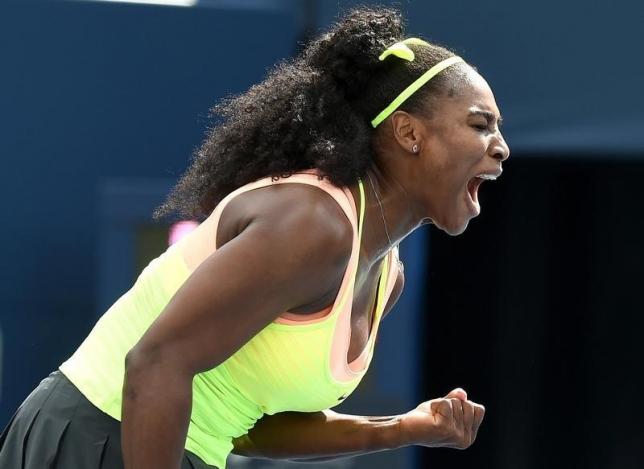 TORONTO - Serena Williams shook off some hard-court rust before rolling to a 2-6 6-3 6-0 win overItaly's Flavia Pennetta at the Rogers Cup on Tuesday, but the home crowd failed to fire up local favourite Eugenie Bouchard, who slumped to another first round exit. Williams, playing her first match of the North American hard-court swing after pulling out at Stanford last week with a sore right elbow, endured a ragged opening set in which she was broken four times and fired four double faults. But the 33-year-old American, a three-time champion on the Toronto hardcourts, eventually found her rhythm in the second round match. While Pennetta would break on her next opportunity to lead 2-1 in the second set, Williams shifted into another gear and stormed through the next four games on her way to levelling the match at one set each. Fans were treated to the sight of Williams in full flow in the third as the 21-times grand slam champion finished off Pennetta with a thundering backhand winner. "It was tough holding serve today for me," said the world number one, adding that she could not recall another match where she had been broken four times in a single set. "It was definitely good for me to have a match like this, to play a good player like her, especially since I haven't played a match on hard court since early April." While all four grand slam titles are already in her possession, a successful defence of her U.S. Open crown next month would put Williams in an exclusive club along with Maureen Connolly, Margaret Court and Steffi Graf as the only women to have swept all four in a single season. While Williams continues to dominate the game, the once-bright star of Canadian Bouchard lost even more of its lustre with a 6-0 5-7 6-2 loss to Swiss teenager Belinda Bencic in the first round. Hailed as the new face of women's tennis just 12 months ago, Bouchard's downward spiral shows no signs of coming to a halt as the 21-year-old fell at the first hurdle for the eighth time in 10 tournaments. In other first round upsets on Tuesday, France's Alize Cornet dispatched ninth seeded Spaniard Carla Suarez Navarro 6-3 6-7(2) 6-4 while Croatia qualifier Mirjana Lucic-Baroni disposed of Czech 10th seed Karolina Pliskova 3-6 7-6(5) 6-2. American Alison Riske outlasted 12th seed Timea Bacsinszky of Switzerland 3-6 7-6(4) 7-6(3) in a three-hour marathon. Russian 11th seed Ekaterina Makarova was a 6-3 6-3 winner over American Anna Tatishvili while 13th seed Angelique Kerber of Germany stormed into the second round with 6-1 6-0 rout of Japan's Misaki Doi. Two former world number ones Jelena Jankovic and Victoria Azarenka made smooth passage to the second round with straight sets wins. Twice Australian Open champion Azarenka, who withdrew from an event in Washington with a sore shoulder, opened with a 6-1 6-4 win over Ukraine's Elina Svitova while Jankovic stopped Frenchwoman Caroline Garcia 7-6(4) 6-2. - Reuters