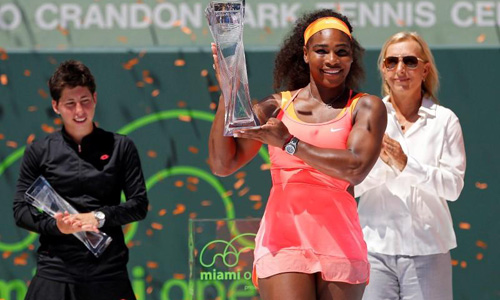 MIAMI - Serena Williams won her eighth Miami Open title with little trouble, enjoying a 6-2 6-0 win over Spain's Carla Suarez Navarro in just 56 minutes on Saturday. The victory was the world number one's third consecutive title at Miami and she becomes just the fourth woman in the open-era to win the same tournament eight times, joining Martina Navratilova, Chris Evert and Steffi Graf. "It feels really good to have eight under my belt. I can't say I thought I would win eight, especially in the beginning of the week," Williams told reporters. The American had to pull out of Indian Wells before her semi-final due to a knee injury and there had been doubt over her participation at Miami. "It just feels really weird," said Williams, "and I'm happy to be able to get through it." In bright sunshine at Key Biscayne, the 12th seeded Suárez Navarro started with determination but Williams broke to go 4-2 up in the first and never looked back as she went on to win 10 straight games. Williams broke again at the end of the first set and the second was barely a contest with the Spaniard winning just five points. The American, a 19-times grand slam champion, produced some magnificent winners, 27 in all, and her powerful serve delivered seven aces. The win also extended Williams' winning streak at premier mandatory level matches to 46. The most titles won at a single event is 12 by Navratilova at Chicago but Williams, 33, appeared horrified at the suggestion she might manage four more in Miami. "I hope not because I would still be here and I would be how old?" she said, counting on her fingers. "No. Let's pray that I don't get to 12." Given the one-sided nature of the final and the lack of real competition for Williams, who has been world number one for over two years, she might not be the only one. - REUTERS