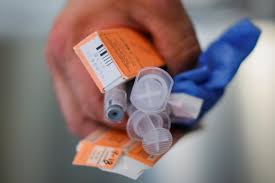 (Reuters Health) - After learning about opioid overdose and how to respond with the opioid-reversing drug naloxone, a group of New York City service industry workers felt “confident and equipped” to help during a real-life overdose situation at their workplace, researchers report.
Public restrooms are a popular location for injection drug use, so employees of fast-food restaurants, diners and other businesses often find themselves unwitting first-responders to a drug overdose, the study authors write. With training, these employees can both protect themselves and potentially save a life, the authors argue. “With an overdose, like a stroke, the quicker the response, the better the outcome,” said lead study author Brett Wolfson-Stofko of the Center for Drug Use and HIV Research in New York City. A previous study by the research team found that about 60 percent of business managers in New York City have encountered drug use in bathrooms, and 14 percent had found someone unresponsive in the past six months, yet 90 percent had no training in how to respond. If service industry employees can administer naloxone, the drug that reverses overdoses, before an ambulance arrives, those few minutes might make a difference, Wolfson-Stofko said. “We need an all-encompassing approach to addressing the opioid crisis, and businesses should have naloxone on site, just as they do automated external defibrillators,” he told Reuters Health in a phone interview. Wolfson-Stofko and colleagues created a training program for service industry workers and recruited 18 employees from two local coffee shops to test how well the training works. The training module included information about the signs of an opioid overdose and about common opioids such as oxycontin, Vicodin, methadone, heroin and fentanyl. It also included training in how to call emergency services and explain the situation. In addition, the training explained New York’s Good Samaritan laws that permit naloxone distribution, as well as the legal protections against arrest with regard to drug paraphernalia found at the scene of an overdose. Before the training, many participants said they had already encountered unresponsive people and syringes at their work, and many had experience with making calls to emergency services and law enforcement officials. After the training, the employees were more willing to respond to opioid overdoses at their business and said they felt comfortable giving naloxone to an overdose victim. They also had significant improvements in general opioid overdose-related knowledge and more positive attitudes about helping opioid users. Participants also offered suggestions for improving the training, such as more hands-on, role-playing exercises that would prepare them for real-world scenarios.
“Most trainings with non-medical professionals in this area have been with family and friends of opioid users, so they already want to help the person who may overdose,” Wolfson-Stofko said. “It was inspiring to see that service industry employees formed a positive attitude about saving the life of a person they never met.”
“It’s quite refreshing to see training that goes beyond just a focus on users helping each other, and instead of being a witness, these employees are willing to be active in an emergency situation,” said Michel Perreault of McGill University in Montreal, who wasn’t involved in the study. “From a psychological standpoint, people must see themselves as someone who can rescue someone else,” Perreault added. “The willingness, the responsibility and the control in an emergency situation is empowering.” Expanding overdose education to the general public is the “new frontier” for naloxone programs aimed at an “all-hands-on-deck” approach to the opioid overdose crisis, said Jermaine Jones of Columbia University, who wasn’t involved in the study. “For a decade, the primary goal was to get naloxone into the hands of users, but what we’re learning about opioid overdoses is that users who inject like to do it alone, often in a public bathroom,” he told Reuters Health by phone. “If they overdose while alone, it doesn’t matter how much naloxone you give them, so it’s a good idea for others to be trained.”