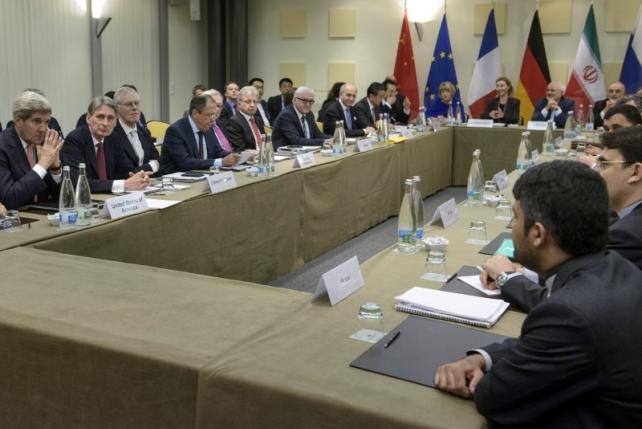 LAUSANNE, SWITZERLAND – The foreign ministers of Iran and six world powers met on Monday in a final push for a preliminary nuclear accord less than two days before their deadline as Tehran showed signs of backing away from previous compromise offers. For days Iran, the United States, Britain, France, Germany, Russia and Chinahave been holding negotiations to break an impasse in negotiations aimed at stopping Tehran having the capacity to develop a nuclear bomb in exchange for an easing of international sanctions that are crippling itseconomy. But officials at the talks in the Swiss city of Lausanne cautioned that attempts to reach a framework accord could yet fall apart. German Foreign Minister Frank-Walter Steinmeier said there had been "some progress and some setbacks in the last hours". "I can't rule out that there will be further crises in these negotiations," he told reporters in Lausanne. In addition to US Secretary of State John Kerry, Iranian Foreign Minister Mohammad Javad Zarif and Steinmeier, British Foreign Secretary Philip Hammond, French Foreign Minister Laurent Fabius, Russia's Sergei Lavrov and China's Wang Yi gathered at a 19th-century hotel overlooking Lake Geneva to try to end the deadlock in the talks. The ministers met for an hour and then broke of their discussions. They were expected to meet again later on Monday. Officials said the talks could run at least until the deadline of midnight on Tuesday or beyond. If there was a framework agreement struck in Lausanne, officials said the meeting might relocate to Geneva for a ceremony. The six powers want more than a 10-year suspension of Iran's most sensitive nuclear work. Tehran, which denies it is trying to develop a nuclear weapons capability, demands in exchange for limits on its atomic activities a swift end to international sanctions. that are crippling its economy. While some issues being discussed in the negotiations have been resolved, there are several differences on which the two sides have been unable to reach agreement. BothIran and the six have floated compromise proposals in an attempt to make an accord possible. One sticking point concerns Iran's demand to continue with research into newer generations of advanced centrifuges that can purify uranium faster and in greater quantities than the ones it currently operates for use in nuclear power plants or, if very highly enriched, in weapons. Another question involves the speed of removing United Nations sanctions on Iran. A senior US official said on Sunday there were other unresolved issues, but expected those would fall into place if the big sticking points could be worked out. Even if Iran and the six powers reach a framework agreement by their end-March deadline, officials close to the talks say it would be very preliminary and could still fall apart when the two sides attempt to agree on all the technical details for a comprehensive accord by June 30. There were several examples of the progress and setbacks Steinmeier referred to. Western officials said Iran suggested it would be willing to accept keeping fewer than 6,000 centrifuges in operation, down from its current figure of nearly 10,000, and to ship most of its enriched uranium stockpiles to Russia. But senior Iranian negotiator Abbas Araqchi told reporters dispatching stockpiles abroad "was not on Iran's agenda." A senior US State Department official said there had been no decisions on the stockpiles. "The issue of how Iran's stockpile would be disposed of had not yet been decided in the negotiating room, even tentatively," the official said in a statement. "There is no question that disposition of their stockpile is essential to ensuring the program is exclusively peaceful...The metric is ensuring the amount of material remaining as enriched material will only be what is necessary for a working stock and no more." Another Western official said there were "other options" for dealing with the stockpile issue it was not shipped to Russia, such as downblending to make it less pure. It was not clear if the Iranian rejection of certain proposals it had previously indicated might be acceptable was a sign that Tehran might be getting cold feet. "It's not clear if these are the usual negotiations tactics to raise the stakes or if they just don’t have enough wiggle room to move ahead," said a Western diplomat. "We'll see today." On the issue of UN Security Council sanctions, officials close to the talks voiced concerns that the five permanent veto-wielding council members could object to plans to strip away some of the UN measures in place since 2006, albeit for different reasons. Britain, France and the United States want any removal of UN sanctions to be automatically reversible, but the Russians dislike the idea of automaticity because it would weaken their veto power, a Western official said. Western officials also voiced concerns that Russia, itself under US and European Union sanctions over Ukraine, might have reservations about lifting energy sanctions over fears that bringing Iranian oil back into the market would further depress the price of oil. Despite the deep disagreements on several points, Western officials said the two sides had been closing in on a preliminary deal that could be summarized in a brief document which may or may not be released. –Reuters