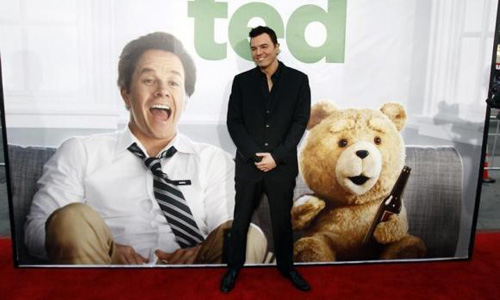 CALIFORNIA - A California production company that sued Seth MacFarlane for allegedly stealing its idea for a foul-mouthed talking bear with a penchant for drinking, drugs and prostitutes for his 2012 hit movie "Ted" has withdrawn its copyright lawsuit. Bengal Mangle Productions LLC had contended in a July 2014 complaint that Ted was "strikingly similar" to its own teddy bear Charlie, who was created in 2008 and has appeared on websites such as YouTube and FunnyorDie. But in a Monday court filing, Bengal Mangle said it cannot pursue its case, being "satisfied that, based on discovery produced in the action, the character Ted was independently created by Seth MacFarlane using his own efforts and creativity and was not copied from plaintiff's Charlie character." Among the other defendants were MacFarlane's Fuzzy Door Productions Inc, film studio Media Rights Capital, and Comcast Corp's Universal Studios, which released the movie. Media Rights Capital in a statement said the lawsuit was without merit. A spokeswoman for MacFarlane said he does not intend to file a countersuit. MacFarlane directed, co-wrote and co-produced "Ted," and provided the bear's voice. The movie starred Mark Wahlberg, and grossed about $550 million worldwide. A sequel, "Ted 2," is expected in June. MacFarlane also created the "Family Guy," "American Dad" and "The Cleveland Show" animated television series. He hosted the 2013 Academy Awards. The case is Bengal Mangle Productions LLC v. MacFarlane et al, U.S. District Court, Central District of California, No. 14-05498. - REUTERS