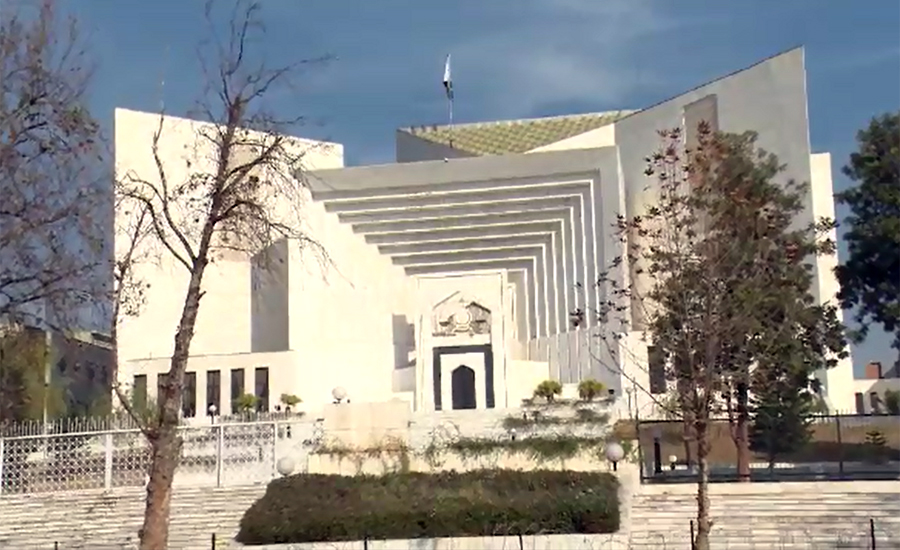 ISLAMABAD (92 News) – The seven-member bench hearing the applications of Justice Qazi Faez Isa against the Supreme Judicial Council (SJC) dissolved after two judges recused themselves from the case on Tuesday. Justice Ejazul Hassan and Justice Sardar Tariq Masood recused themselves from the case. Justice Umar Atta Bandial remarked that they are sending the matter to Chief Justice Asif Saeed Khosa for forming the new bench to hear the applications. “We will also request for the early hearing of the matter,” he remarked. Earlier, CJP Asif Saeed Khosa had formed a seven-member bench led by Justice Umar Ata Bandial and comprising Justice Maqbool Baqar, Justice Manzoor Ahmad Malik, Justice Sardar Tariq Masood, Justice Faisal Arab, Justice Ejazul Ahsan and Justice Mazhar Alam Khan Miankhel to hear the petitions. On August 19, the Supreme Judicial Council had dismissed a government’s reference of misconduct against Justice Qazi Faez Isa for writing letters to President Dr Arif Alvi. In the verdict, the SJC ruled that the petitioner had failed in proving that the letters written to President Arif Ali were leaked by Justice Qazi Faez Isa. “The letter to President Arif Alvi was written in personal capacity. It was not a misconduct to write a letter to the President,” it ruled. In May, President Arif Alvi had authorized the filing of a reference with the SJC against alleged misconduct of Justice Isa and Sindh High Court’s Justice KK Agha, who allegedly hold foreign properties either in their names or through their spouses. Consequently, Justice Isa had written a letter to President Alvi seeking clarity regarding reports that the government had filed a reference against him over allegations of misconduct. Copies of the letter were sent to Prime Minister Imran Khan and the apex court as well. In the second letter to the president, the SC judge requested a copy of the reference filed against him. Following the controversy, the Supreme Court Bar Association (SCBA) and the government came face-to-face, as the lawyers’ body demanded President Alvi’s impeachment for filing the reference, while other bar associations also expressed solidarity with the top court judge. Chief Justice of Pakistan (CJP) Justice Asif Saeed Khosa had remarked that the government could not remove Justice Isa and that the SJC would deal with the matter fairly. “Trust the judges. They will ensure justice [in the matter],” the chief justice said at the Cambridge University in the UK while responding to a query about Justice Isa. On June 12, the Pakistan Bar Council (PBC) had constituted a joint action committee of lawyers’ representatives to decide a future course of action with regard to the presidential reference against Justice Isa and Justice Agha. “The move of filing the references by the government against both these judges smacks [of] malafide of the government. The manner and haste shown in filing the references and their timing also raise eyebrows in the legal fraternity. Therefore, we disapprove this move,” read a resolution passed at PBC meeting. The apex body of lawyers said it expected that “the SJC would not become a party to such designs of the government and would proceed with the matter purely in accordance with law and as per the Constitution.” The PBC also approved the decision taken by a joint meeting of bar representatives on June 8 and 9 in respect of observing a nationwide protest day on June 14. With a majority of 14 members, the PBC also suspended the membership of Law Minister Dr Farogh Naseem. It resolved that the role played by the law minister in filing of references against Justice Isa and Justice Agha was “highly condemnable as he is instrumental in hatching this conspiracy against the independent judiciary.”