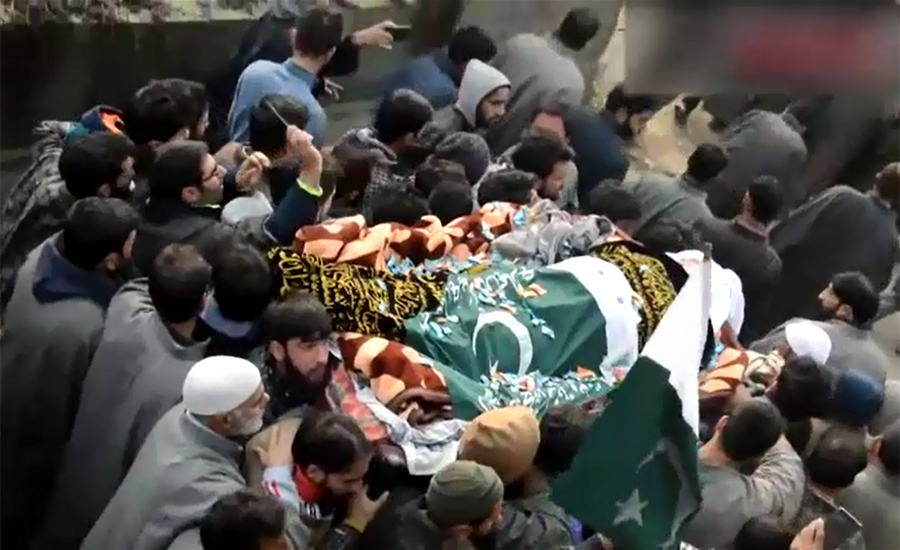 SRINAGAR (KMS) – In Occupied Kashmir, Indian troops in their fresh act of state terrorism martyred eight more Kashmiri youths in South Kashmir, raising the toll to 18 in the past three days. Six youths were killed by the troops during cordon and search operations and firing on protesters at Batagund in Kapran area of Shopian district. Bodies of the youths were recovered from the debris of a house destroyed by the troops during the operation. Another youth identified as a 10th class student, Nauman Ashraf Butt, was killed in the troops’ firing on the people protesting against the killings. The firing left many protesters injured including a five-year-old female baby. At least, 15 critically injured were admitted to different hospitals in Shopian, Kulgam and Srinagar. The troops killed one more youth in Khrew area of Pulwama district. The authorities suspended internet services in South Kashmir. In the meantime, an Indian army man was killed and another was injured in an attack in Kapran area of Shopian district. Thousands of people participated in funeral prayers of the martyred youth in different areas of the territory. A sea of people poured in from several villages of South Kashmir to attend the last rites of the 10th class student, Nouman Ashraf Butt. Amid pro-freedom and anti-India slogans, Nouman was laid to rest in his native Bolsoo village in Kulgam district. The students of Kashmir University offered funeral prayers in absentia for the martyred youth. The students assembled in the university campus in Srinagar and raised pro-freedom and anti-India slogans.