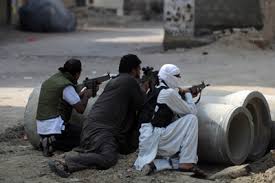 KARACHI (92 News) – Sindh Rangers claimed to have arrested several activists of a banned organisation and accused of the Lyari gang war during an operation in several areas of the city on Sunday. Sources disclosed that the paramilitary forces had closed the entry and exit routes of the areas and conducted the operation.