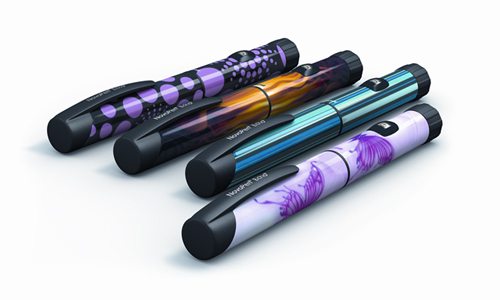 ROME – A warning for people who use insulin pens: Not shaking your NPH insulin pen before injecting can result in wide variations in your insulin level and blood sugar control, researchers from Italy report. NPH insulin comes as an insoluble mixture of crystals and liquid and must be resuspended before injection. Researchers at Perugia University in Italy wanted to know what difference it would make if patients didn’t resuspend their NPH insulin by tipping the insulin pen 20 times before injection - and if they didn’t shake it by tipping it back and forth, whether it would matter how they held the needle during the injection. As it turned out, everything mattered. One of the researchers, Dr. Geremia B. Bolli, told Reuters Health he was surprised by “the high variability of effects on lowering of blood glucose depending as to whether the NPH pen is properly resuspended or not, and (if it’s not resuspended), even great differences depending on the position of the pen, i.e., horizontal, vertical with tip up or down.” “The same NPH appears as a different insulin in each of these conditions,” Bolli said by email. Compared with resuspending NPH insulin, not shaking the pen before injecting could result in lower insulin levels in the blood (if you inject with the needle flat or pointing up) or higher insulin levels (if you inject with the needle facing down). Your body would also feel the effects of insulin earlier if you injected with the needle down without shaking it first or later if you injected it flat or needle up without shaking it first. This could result in your blood sugar rising above desired levels sooner (needle flat or pointed up) or later (needle pointed down) when you don’t resuspend the NPH insulin by shaking the pen first. The research team reported in the journal Diabetes Care that insulin levels could vary by as much as 23% and blood sugar control could vary by as much as 62% depending on whether NPH insulin is shaken before injecting, or not. “For the users of NPH and also of the pre-mixed insulin (rapid+NPH) it is important to resuspend carefully prior to injection,” Dr. Bolli concluded. “This will reduce variability of NPH effects a lot.” Dr. Satoru Yamada from Kitasato Institute Hospital, Tokyo, Japan, who was not involved in this study, told Reuters Health by email that the results show it's very difficult to have stable efficacy with NPH insulin. Yamada advises doctors to select long-acting analogs rather than NPH itself. Bolli agrees that it’s great if patients can afford the newer glargine and detemir forms of insulin, but he points out that for many patients, these alternatives are beyond their means. And for these patients, the message is clear: always resuspend your NPH insulin before injecting. –Reuters