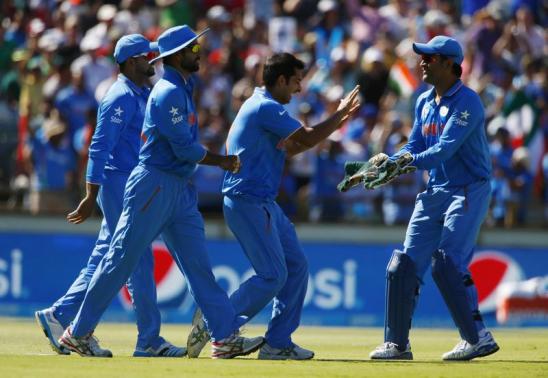 PERTH – Mahendra Singh Dhoni made a calm unbeaten 45 to guide India to a four-wicket victory over West Indies on Friday which sent the holders into the World Cup quarter-finals. Fast bowler Mohammed Shami (3-35) returned from injury to torment West Indies with three wickets as the Caribbean side were bundled out for 182 after opting to bat first. West Indies captain Jason Holder (57) hit his second half-century and highest score in one-day internationals to give his team some sort of a total to defend against India, who won their fourth match in a row at the tournament. India also struggled on a pitch offering plenty of bounce for the tall West Indies fast bowlers and kept losing wickets during the chase before holding their nerve to get over the line with 65 balls to spare. Dhoni showed why he is known as 'Captain Cool' and top- scored for his side, who were reduced to 107-5 at one stage. The right-hander added 27 for the sixth wicket with Ravindra Jadeja (13) and an unbroken 51 for the seventh with Ravichandran Ashwin (16 not out) to take India home. Virat Kohli also contributed with a confident 33 off 36 balls and added a crucial 43 for the third wicket with Ajinkya Rahane (14). Jerome Taylor (2-33) dismissed openers Shikhar Dhawan (nine) and Rohit Sharma (seven) cheaply to boost West Indies' chances of defending the low score. The Caribbean bowlers were also guilty of bowling 19 wides and three no-balls. Shami, who missed India's win against the United Arab Emirates with a knee injury on Saturday, put West Indies on the backfoot early by dismissing hard-hitting openers Dwayne Smith (six) and Chris Gayle (21) with the new ball. Shami and fast bowling partner Umesh Yadav (2-42) started well, bowling fast and short on the WACA pitch, considered the quickest in the world, as India dominated the explosive West Indies batting lineup. Gayle, who hit the World Cup's highest individual score of 215 against Zimbabwe last week, offered two difficult chances before he pulled Shami straight to Mohit Sharma at deep square leg. He was also guilty of running out Marlon Samuels (2). With their talisman gone, West Indies were reduced to 35-4 and then 85-7 on the first ball of the 25th over before some resolute batting from the tail saw them through to the 45th over. Right-arm paceman Shami came back with an older ball to take out former captain Darren Sammy (26) to end a promising 39-run stand for the eighth wicket before Holder added 51 for the ninth with Taylor (11). Holder hit four boundaries and three sixes before becoming the last man to fall for West Indies off the bowling of Jadeja. It was one of two wickets for the left-arm spinner to complete another strong bowling display by the two-time champions. –Reuters