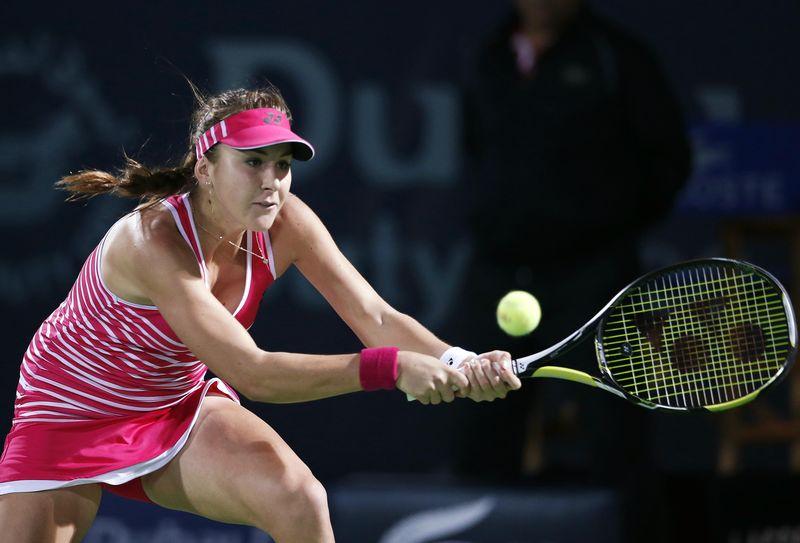 INDIAN WELLS - Caroline Wozniacki became the biggest name to fall at the BNP Paribas Open on Monday when the fourth seed was ousted 6-4 6-4 by Swiss teen Belinda Bencic on Monday. Second seed Maria Sharapova won an absorbing baseline battle with long-time rival Victoria Azarenka 6-4 6-3 in just under two hours while sixth-seed Eugenie Bouchard demolished American CoCo Vandeweghe 6-3 6-2. Wozniacki, champion at Indian Wells in 2011, had overwhelmed Bencic 6-0 6-0 in their only previous meeting in Istanbul last year but it was a very different story at the California desert venue as the Dane struggled for consistency. "Honestly, it was two completely different matches," Wozniacki said after being broken twice in the opening set and once in the second at a sun-bathed Indian Wells Tennis Garden. "I went out there today and I didn't play well at all. "She was steady. She took the ball early as normal, and she served pretty decently, but I didn't put three balls in play today. She only had to put balls back in my court." Bencic, who celebrated her 18th birthday last week, was delighted to clinch her first victory over a top-five player. "In Istanbul I had maybe too much respect and I was afraid, nervous," said the Swiss, who gave notice of her potential by reaching last year's U.S. Open quarter-finals. "Today I really had a good game plan. I did what I had to do." SERVING WOES Sharapova and Azarenka treated the stadium court crowd to one of the best women's matches so far. The Belarusian saved five match points before Sharapova sealed victory at the sixth attempt, ending the contest with a dipping crosscourt backhand. "My serve let me down in the first set," Sharapova said after levelling her career record against her fellow former world number one at 7-7. "I did everything else well, except serving. "I did a much better job in the second set. She will play until the last point and that's what made it so tough." The two players traded breaks in the seventh and eighth games before Sharapova took the opening set in 67 minutes, a marathon 10th game ending when a miss-timed Azarenka forehand flew wide. With improved serving, Sharapova seized control of the second set and broke Azarenka in the fourth and sixth to take a 5-1 lead. The Belarusian clawed her way back to 3-5 but the second seed then served out for the win. While Sharapova had to battle before sinking Azarenka, it was plain sailing for Bouchard. The Canadian used her potent forehand to great effect as she broke an error-prone Vandeweghe once in the opening set and twice in the second, completing a one-sided victory in just over an hour. In other matches, fifth-seeded Serb Ana Ivanovic lost 6-2 5-7 6-2 to Frenchwoman Caroline Garcia, while reigning champion Flavia Pennetta of Italy beat Australian Samantha Stosur 6-4 6-2. - Reuters