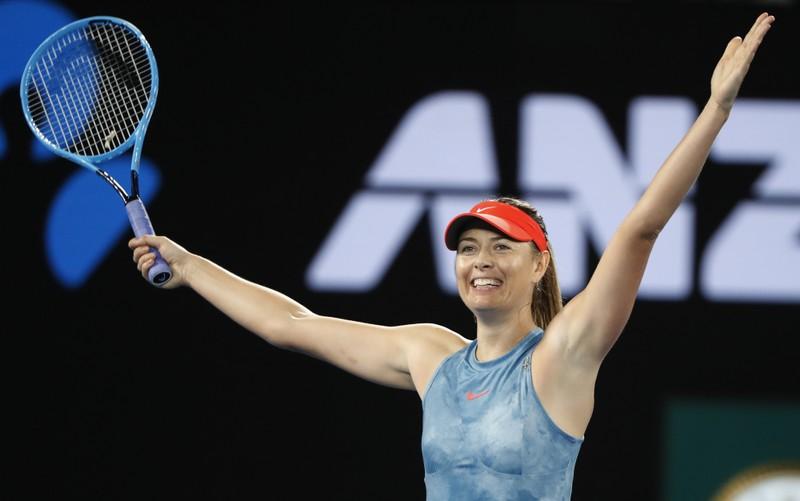 MELBOURNE (Reuters) - Maria Sharapova craves tough fights against top players, something she has been denied in the recent years after her ranking plummeted due to doping and injury problems, the former world number one said on Friday. The five-times Grand Slam winner ousted defending Australian Open champion Caroline Wozniacki 6-4 4-6 6-3 with her aggressive brand of tennis and wore a black crop top to the post-match news conference. “It was a good win. I feel pretty happy about it. Even wearing a crop top. I’m really happy. I don’t pull those out often,” a beaming Sharapova told reporters after booking her spot in the fourth round. The last Grand Slam came at the French Open in 2014 for the 31-year-old Russian, who was banned for 15 months for taking banned drug meldonium in 2016. She also had to cut her 2018 season short in September because of shoulder problems. She is ranked 30th in Melbourne, where she won in 2008, and proved her title credentials with the victory against Wozniacki after losing only three games in her first two matches. She hit 37 winners against 10 from an opponent known for her tremendous court coverage and grinding down opponents in long rallies. Sharapova said she missed matches like the one she played against Wozniacki and those victories meant much more to her. “I felt very much in the moment. I felt present,” she said. “You know, sometimes... I was anticipating the match and I wanted that match to happen and these are really the types of match-ups that I haven’t really had where I could really challenge myself. “Whether it was a bad result or an easy two-set loss, but to be in the grind of things and to really have to figure out a way to be on top is what I missed. I didn’t really get many of those chances. “I think you learn a lot, and you really, when you put yourself in those positions and you get through, those are great, great victories.” She has peppered the courts at Melbourne Park with her powerful groundstrokes and has shown marked improvement with her returns. Asked about the secret behind the improvement, Sharapova said: “Practice, lots of practice, and I have certainly had a lot of months of those. “But it’s always different, bringing that practice into match play. I think that’s the one thing that was tough for me to get back the hand-eye coordination after not playing for a long time. “The return, the anticipation. Those are the types of things that I think you lose being away from the game. Thought I started returning better middle of last year but still not where I want it to be.” Wozniacki was not too hard on herself and said she was pleased with her effort and left everything out on the court. “I did my best out there. I was fighting till the end. It just wasn’t enough today. I did my best. I did all I could. Just came up short. That’s sports sometimes,” the Dane said. “It was just, you know, she was just a little bit better than me today. And that was really it.”