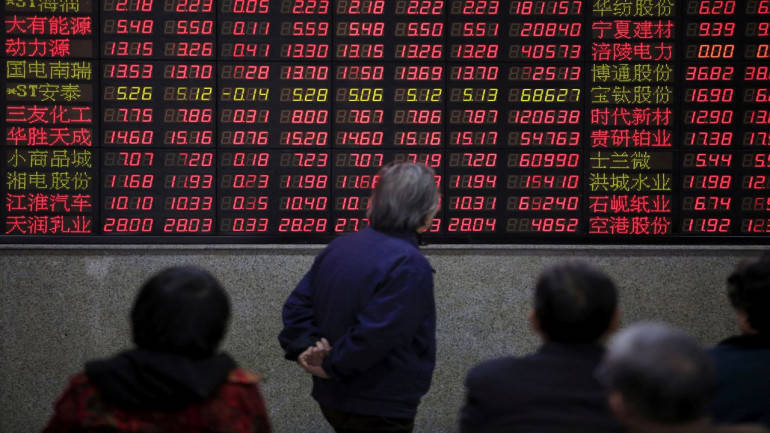 SYDNEY (Reuters) - Asian shares fell on Tuesday and the euro slipped back to 6-1/2 month lows as early elections loomed in Italy, but a revival in diplomatic talks with North Korea and a retreat in oil prices from recent highs supported sentiment. MSCI’s broadest index of Asia-Pacific shares outside Japan .MIAPJ0000PUS dipped 0.3 percent after three consecutive sessions of gains. Japan's Nikkei  skidded 0.8 percent while South Korean shares slipped 0.5 percent. Australia's benchmark index was a touch firmer. Liquidity is expected to be relatively thin with market holidays in Singapore, Malaysia, Indonesia and Thailand. “The market has turned its focus to the continuing political situation in Italy,” said Nick Twidale, Sydney-based analyst at Rakuten Securities Australia. “This should keep the risk trades pressured to the downside.... (The) focus will remain on the on-again, off-again US-North Korean summit and the US-China trade relationship as we move through the Asian trading session,” Twidale added. E-Mini futures for the S&P500 ESc1 gained 0.1 percent. Globally, trade was subdued overnight with market holidays in the world’s two biggest financial centres - London and New York. The tick up in US stock futures came as South Korean President Moon Jae-in flagged more impromptu talks and summits with North Korea’s Kim Jong Un after the pair’s surprise meeting at the weekend. Kim has reaffirmed his commitment to “complete” denuclearisation of the Korean peninsula, Moon said, as US officials seek to revive what would be a historic meeting between President Donald Trump and Kim.

European shares were hammered overnight by worries over snap polls in Italy after the anti-establishment 5-Star and League parties abandoned plans to form a government. Investors feared Italy’s election campaign could focus on the country’s continued membership of European institutions and strengthen the populist parties’ hand. Adding to the uncertainty, Spanish Prime Minister Mariano Rajoy will face a vote of confidence in his leadership . Europe's STOXX 600 skidded 0.3 percent and Italy's FTSE MIB benchmark index  fell 2.1 percent to its lowest since early March. The euro was last at $1.1617 from $1.1608, its lowest since early November. “It is clear that the bitter political battle (in Italy) will continue,” ANZ analysts said in a note. “In this environment, uncertainty and market turbulence look set to continue.” The dollar rose 0.2 percent against a basket of major currencies to stay near the highest since mid-November. .DXY Against the safe harbour yen, the dollar dipped to 109 , not far from a recent three-week trough of 108.94. Analysts will next focus their attention on US inflation data due later in the week which could provide clues to future interest rate rises ahead of the Federal Reserve policy meeting next month. Another potential overhang for Asian emerging markets was an ongoing truckers’ strike in Brazil to protest rising fuel prices. Brazilian equities plunged more than 4 percent to their lowest level this year. “The Brazilian strike (will) potentially feed through into higher food prices, with negative implications for EM Asia,” analysts at JPMorgan said in a note. Oil stayed on a slippery slope on rising expectations that major producers may reverse some of the production cuts they have maintained for 17 months. US crude futures CLc1 stumbled to six-week lows and looked set for a fifth straight day of declines. It was last down 1.7 percent at $66.76 a barrel. Brent crude futures LCOc1 edged up 0.2 percent after dropping to $74.49 per barrel , their lowest in about three weeks. They were last at $75.43. Spot gold XAU was barely changed at $1.344.7 an ounce.