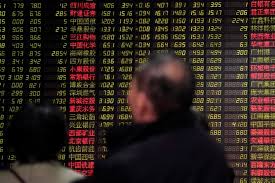 SYDNEY (Reuters) - Asian share markets slipped into the red on Monday as caution gripped investors in a week in which the Federal Reserve is likely to hike US interest rates and perhaps signal that as many as three more lie in store for the rest of the year.

Japan's Nikkei extended early losses to drop 1.3 percent as exporters were undermined by recent broad-based gains in the yen.

The pain was not confined to Asia, with the June contract for E-Minis futures on the S&P 500 ESc1 down 0.3 percent and FTSE futures FFIc1 off 0.4 percent.

While Wall Street had bounced on Friday, the major indices still ended lower for the week. The Dow  lost 1.57 percent, the S&P 1.04 percent and the Nasdaq 1.27 percent.

The decline was surprising given figures from Bank of America Merrill Lynch showed a record $43.3 billion of inflows into equities last week, outpacing bond flows for the first time since 2013.

Whether the cash continues to flow could depend on what the Fed decides on Wednesday. All 104 analysts polled by Reuters expected the Fed would raise rates to between 1.5 percent and 1.75 percent on Wednesday.

They were less certain on whether the “dot plot” forecasts of committee members will stay at three hikes this year or shift higher.

It will also be the first press conference for new Fed Chair Jerome Powell.

“Expected is a confident Fed Chair, both with respect to the economy’s strength and the Fed’s approach to policy,” said analysts at Westpac in a note.

“While growth forecasts and the distribution of rate projections are likely to drift up, the median fed funds forecast should remain unchanged at three in 2018 and three more in 2019,” they added. “Gradual and timely are the operative words for policy.”

Any nod to four hikes would normally be considered as bullish for the US dollar, yet the currency has shown scant correlation to interest rates in recent months, falling even as policy tightened.

Reasons cited by dealers include concerns about the US budget and current account deficits, political chaos at the White House, better growth in competing countries, particularly Europe, and the risk of a US-led trade war.

Trade will be top of the agenda at a two-day G20 meeting starting later on Monday in Buenos Aires and any signs of escalating stress between the US and China could make investors in Asia nervous.

The cautious mood was evident in demand for the safe-haven Japanese yen which climbed against a raft of currencies last week. On Monday, the dollar was off 0.22 percent at 105.78 yen and not far from its recent trough at 105.24.

The prospect of higher US interest rates was been a burden for non-yielding gold, which slipped 0.8 percent last week. Early Monday, the metal XAU= was down at $1,311.20 per ounce.

Oil prices eased after ending last week with a solid bounce. Brent futures LCOc1 were down 38 cents at $65.83 a barrel, while US crude CLc1 futures for April, which expire on Tuesday, dipped 36 cents to $61.98 a barrel.