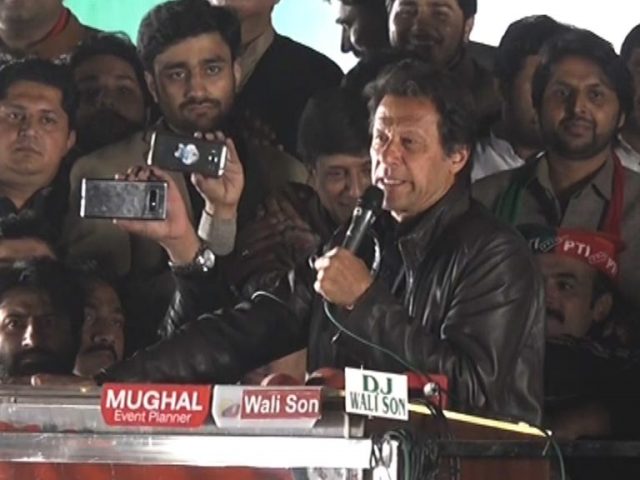 SHEIKHUPURA (92 News) – Pakistan Tehreek-e-Insaf Chairman Imran Khan said on Sunday that Sharief’s and Zardari’s destroyed this country. Imran said that people have come to streets against the PML-N. Imran said that Hudaibiya case will prove disaster for the entire Sharif family as Hudaibiya case involves the names of all members of Sharif family and the entire nation is keenly observing the further actions of Chairman NAB. Addressing a rally in Sheikhupura Imran said that the former NAB chief helped facilitate corruption cases of the government officials. He said once in power his party will not spare former National Accountability Bureau chief Qamar Zaman Chaudhry, until he meets justice and is behind bars. The PTI Chairman also lashed out on Sheikhupura’s Deputy Commissioner for not providing the stadium for procession ceremony mocking him as Shahbaz Sharif’s errand boy. He further went on to say that those who labelled him as agent of Jewish lobby were the ones who altered the prophethood clause in the election bill nomination papers to please their ‘Western masters’, and added that they denied it after nation reacted harshly but acknowledged it in the end. PTI chairman also said that the country cannot be fixed until the leaders stop milking it. Khan recalled that foreign tourists used to visit Pakistan in its glorious past while the country has been so badly exploited now that Pakistanis go to foreign countries for employment and good standard of living. He added that the country’s sad state of affairs is due to the likes of Nawaz Sharif and Asif Zardari.