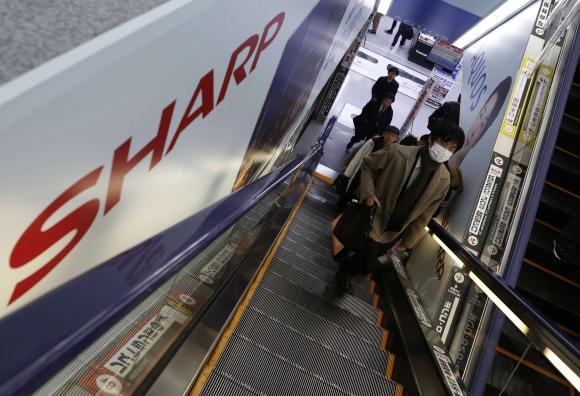 TOKYO - Loss-making Japanese electronics firm Sharp Corp (6753.T) said it's not considering spinning off its liquid crystal display business as part of a bailout plan under discussion with lenders seeking restructuring moves in return for extending support. "This is not something we announced, nor is it something we are considering," Sharp said in a statement on Friday. The firm issued the statement after the Sankei daily newspaper earlier reported the company plans to spin off the LCD unit. Sankei's report followed other media coverage on expected changes at Sharp, including a possible exit from North American TV manufacturing, in return for a bailout by banks. Sharp will likely cut 12 percent of its workforce in a global restructuring expected to cost more than $1.7 billion, a person familiar with the plan told Reuters on Thursday.
Sharp Chief Executive Kozo Takahashi has been negotiating terms of a rescue plan with the Bank of Tokyo-Mitsubishi UFJ, part of Mitsubishi UFJ Financial Group (8306.T), and Mizuho Financial Group's (8411.T) Mizuho Bank. It would be its second major bailout since 2012, and comes after the company last month warned of its third annual loss in four years.